Occurrence
=========
I, Jonas Hardie, was the Chief Engineer. An unknown subject blew a hole into the vault causing moderate damage. I quickly ran to the vault and found a random assistant standing in the hallway outside the vault. As the CE, my main concern was fixing the breach. While I was conducting my repairs, this assistant walks through my hololock and opens the secured door to the vault, now trespassing. I initially paid them no mind as I was busy fixing the hole. Then I witness this subject stealing from the vault. When a major crime occurs (hole blown into vault) and then someone uses that time to commit another crime (stealing from vault) makes them look like a traitor doing traitorous things.

I kick this assistant to the ground to stop him until security arrives (they were on the way already due to the beach). I continued my repairs and the assistant was transported to the medbay. Upon completing my repairs and discussing the cause of the breach with a detective, the same assistant breaks into the vault AGAIN now walking past the detective's security holo barrier to trespass into the vault. They AGAIN start to steal from the vault. The detective unloads their revolver into this assistant, as they were now confirmed to be a hostile to the station. As the detective reloads, I use a welder and burn the assistant twice to prevent this assistant from getting back up and attacking us. It was unknown what tools or weapons they had.

The assistant ends up dying from this encounter. Being butt hurt, the assistant does an adminhelp on me.

AdminHelp
=========
FlamingCheese was the staff member who responded. I explained this situation to FlamingCheese who was not budging on his belief. FlamingCheese claimed that it was not my job as CE to stop criminals. Being the assistant was only stealing a few coins, I should have called security. They told me to look at the end of round logs to see that the assistant was not a traitor. I attempted to explain to FlamingCheese I cannot use that meta-information in character. I don't even have a way to see who or who is not a traitor until the end of round report appears. Even with the detective taking the first damaging shot they labelled me the "instigator."

In their note against me, they posted the following:

" As the CE killed an assistant only for taking a few coins from the compromised vault (a traitor blew a hole into it), there was no prior instigation between the two, claimed the assistant blew up the vault without any search to find out, taking action against antagonists (beside self-defense which does not apply in this scenario) is not your job as a CE, argumentive and unable to understand his mistake in the ticket."

Break down of Admin Remark
=========================
1. I did not have proof at the time of the incident that the assistant was not a traitor. All I knew is they were stealing from the vault after there was a big explosion breaching the vault.
2. The instigation was that I had reasonable suspicion that they damaged the station. As CE I have a duty to prevent damage to the station.
3. They claim I should have searched the subject for a detonator for the explosives and then called security. Searching people for contraband is sec's job to begin with. You can't claim I should do a sec job and then say I shouldn't do sec's job.
4. They insulted me by claiming I was argumentative when I was trying to explain my logic.

Rules supporting my action
=======================
*Rule 1 Precedents 6. "You may defend your workplace from trespassers who damage or steal property within that space with significantly greater force than elsewhere..."

*Escalation: "You may instigate conflict with another player within reason (you can't completely destroy their department, kill them unprovoked, or otherwise take them out of the round for long periods of time) but they are entitled to respond with violence. "

We had reasonable suspicion that they blew a hole in the vault as they started to steal soon after. Even without the breach in the vault, they were trespassing and stealing from a highly restricted area of the station. I had no way to restrain the assistant. Instead of making the detective (who had the tools, capability, and training) the instigator for failing to property take the assistant into custody, shot and did the majority of the damage. I did what I had to do to protect myself and the station. I had already kicked them to the ground to stop them in their first raid attempt on the vault, but they returned for round 2.

*Rule 4 Precedents 1. "Non-antagonists are allowed to assist antagonists given sufficient IC reasoning but assisting an antagonist doesn't mean you get to act like one . If in doubt, ask an admin if a particular action is okay. Depending on the level of assistance, sufficient IC reasoning could be simply treating everyone who goes into medbay regardless of them being a murderer or not, all the way to being threatened under pain of death by an antagonist to do something."

Summary
========
FlamingCheese assumed I was guilty from the beginning. I explained my suspicions and my actions. I believe that my actions were just. FlamingCheese did not care about my opinion and gave a rebuttal to every comment. They gave no advise other than advise that countered their own claims (such as searching them for contraband as CE). I am requesting a review of FlamingCheese's behavior and decision making when it comes to player punishment.
Top

Re: [FlamingCheese] Jonas Hardie - Lack of common sense and logic.

I imagine this policy goes for notes as well, but a successful appeal is the minimum before a complaint like this.


Admin's banning conduct can not be the subject of an admin complaint. That is what appeals are for, and the appeal leading to the ban being overturn is the minimum bar required before a complaint can be filed that references the ban conduct.

Notes can be appealed if you find them "excessively harsh" (I believe the wording is), or of course, wrong.

Shaps-cloud wrote: ↑Mon Dec 07, 2020 7:59 am May eventually become one of the illusive maintainer-headmins if they choose to pursue that path, having a coder in the senior admin leadership has usually been positive for both sides in the past.

Re: [FlamingCheese] Jonas Hardie - Lack of common sense and logic. 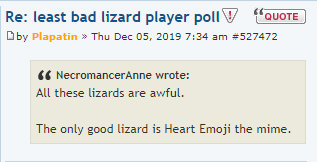