Appeals which have been closed.
Locked
4 posts • Page 1 of 1

BYOND account: Yulice
Character name: Yulice Redgrave
Ban type: Server Ban
Ban length: 3 Days
Ban reason: (MRP) Excessive powergaming as a geneticist- Had a medkit packed with supplies, flash proteciton, hulk, a laser scaple in their boots, and obtained xenomorph organs after being given gear by secrity after OFFERING to help hunt the xenomoprh queen. They additionally lied about returning all security related equipment, still having armored clothing.
Time ban was placed: 2022-01-18 06:49:11
Server you were playing on when banned: Manuel
Round ID in which ban was placed: 176799
Your side of the story: It happened on my last round of the night, and it was a round that drug on for almost three hours if I recall, and was very tired already at the point when the round was ending and the bwoink came up. Early on, a blob popped onto the station along with me getting flashed by a headrev, so I set about gearing up, though the revolution was very quickly squashed due to the one headrev being an absolutely obtuse tool. I managed to kill the captain very shortly before the headrev died, and set about getting him everything back, but kept the gear I had, though I wouldn't call much of it powergaming otherwise. The medkit had an aiuri and libital spray in it from the vendors, which cost personal credits and are also impure, along with a bottle of multiver to go with the usual sutures and regen meshes. Flash protection was obtained post revolution mostly because I enjoy the look of sunglasses, though it would be fair to get them having already been flashed by a rev. Hulk is irrelevant, given I was a geneticist. Laser scalpel was a valid self defense tool from my own techfab, especially given I'd already been antagonized previously in the shift. Xenomorph organs were taken by me because I was the one who had actually managed to knock the queen into crit, both as a reward and because there were callouts of there still being xenomorphs, and I wanted to make the riot helmet/vest available for someone who wouldn't have a hive node and was susceptible to facehugger attacks. I offered to help in the first place because sec had, frankly, been highly incompetent that round from my observation and I didn't feel like waiting for them all to die before we dealt with the xenos ourselves. This was amplified to me by the fact that they'd given the clown a loaded WT (which she dropped and I scraped up off the floor to use against the xenomorphs, and then returned to sec alongside the riot gear despite not actually being given the WT by them myself.) I hung onto the beret and vest because I'd had them since way back when the shift started, because they also have a nice aesthetic, and other players who aren't sec frequently ask for armor vests/berets in addition for stylistic choices. That, and even being immune to facehuggers, a wily xeno could still just slice the fuck out of me, so I wanted to keep SOME measure of protection.
Why you think you should be unbanned: The ban in this case does absolutely feel unjust, given I had plenty of reason to have/obtain what I did, and legally most of what I had was either very easily publicly obtainable or was relevant to what was available in my department. The time away from the game wasn't a big deal, as it is only three days, but the additional note on my profile is a bit of a sour thing to me, and I'd like to get it removed if possible.
Top 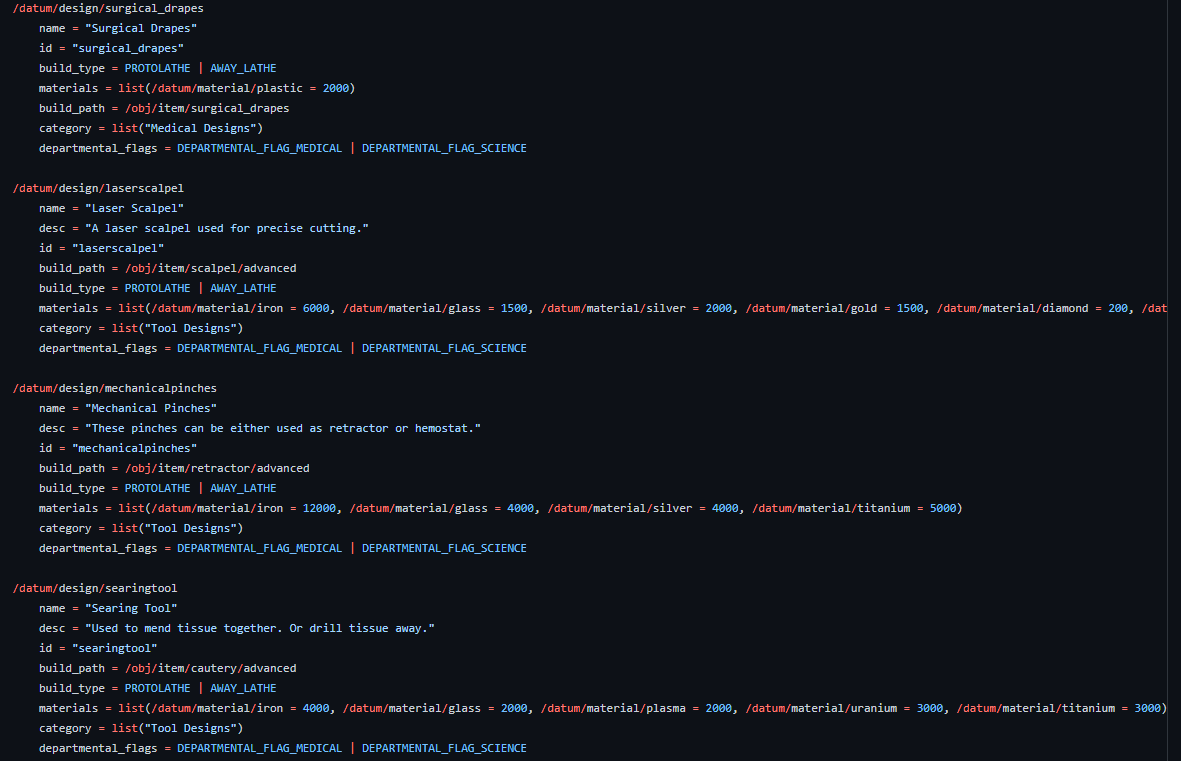 As you can plainly see in this image, laser scalpels are 100% equipment science staffers(such as Geneticists, who used to be med-sci and are now just sci) can access via their departmental lathe. 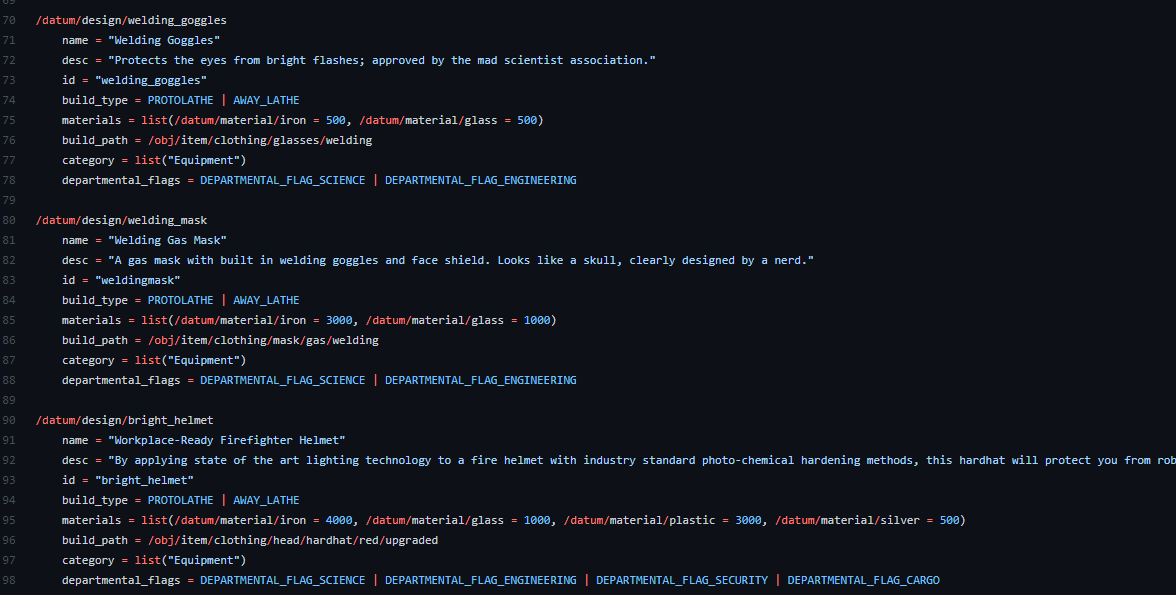 As you can plainly see in this image, three separate types of flash protection are available to all science staff via their departmental lathe.

They're a Geneticist. They're the one person on the station who's technically allowed to have Hulk because it's their job.

after being given gear by secrity

This claims that Security gave the gear to Yulice willingly and with consent. I do not see any logs of Security requesting the gear back. Why does this ban imply they needed to return the gear, given the next paragraph?
Additionally, this round featured:
1. A Revolution(which Yulice was part of)
2. A Blob
3. A Xenomorph Infestation
4. Nuke Ops via the Starfury Traitor objective.
This is the sort of round where Security handing out gear to trustworthy folks is entirely normal and expected behavior, and crewmembers being prepped for self defense is entirely reasonable.


after OFFERING to help hunt the xenomoprh queen

This implies that it is not allowed for crewmembers to fight the xenomorphs under the Stay In Your Lane rules. This is a serious precedent you're setting here and I don't think you've considered the full ramifications of this on the game given the sheer strength of Xenomorphs. Xenomorphs are 100% designed around the entire crew throwing down, not just Security. Xenomorphs have absolutely zero restrictions on holding back, as per the murderbone chart from Roleplay Rules. 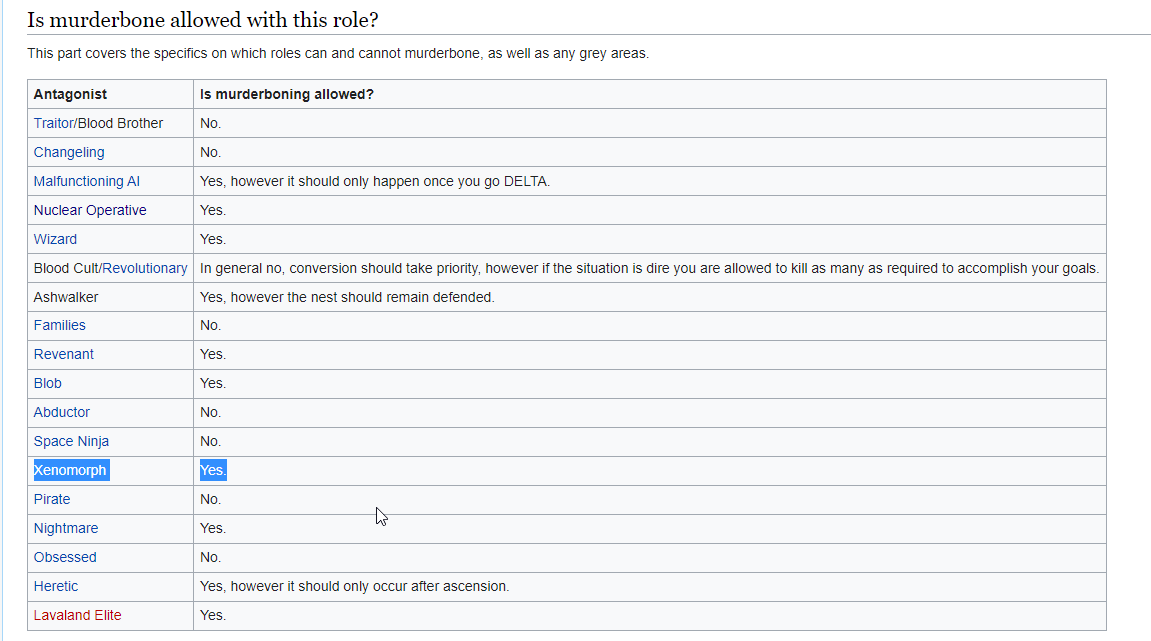 The Xenomorph ruleset is a round-ending ruleset in everything but the ability to set the nuke off, often requiring admins to manually end the round or send in ghosts as ERT members to fight the xenomorphs because of how powerful they are. It is entirely unreasonable to punish a Geneticist for fighting xenomorphs given the game is designed around the entire crew throwing down with the xenomorphs.

Seemingly unprompted random smites being applied to the banned player here. Randomly smiting players, even with joke smites, is unprofessional as shit. This isn't an event, this is complaint-able behavior.

I want to start this by apologizing. This is not the quality of work I strive for in my adminship, nor is it the quality I have shown.

I went into the ticket abrasively, which I also apologize for. There were two factors that launched my investigation in the first place.
I have annexed in-game names and ckeys, as they are not directly relevant.

When I orbited Yulice they were on a surgical table receiving xenomorph organ implants, and doing an inventory check revealed a micro-managed inventory and armored clothing. After reading more of the logs and taking note history into consideration I bwionked yulice. I will admit fault once again on my poor professionalism, I was accusatory, and when Yulice tried to explain their side I was too firm on my accusations.

When I looked at the gear spread I pointed out the security gear, when I was told the gear was returned I looked again and saw that an armored vest and an armored security beret were still in possession. After checking say logs I find that Yulice offered to help hunt the xenomorphs. The xenomorphs were killed and all of the infected were rescued, one clown refused treatment and eventually burst but was promptly killed due to it being in public. I believe once a situation is resolved gear being returned is appropriate.

I believed, due to the armored clothing, that you did not return all of the security gear. I mentioned your possession of a laser scalpel and hulk because I was attempting to get the point of how well-armed you were across, but I ended up failing to do so.

These two explanations do not line up. In the ticket, I believed you intentionally hung onto the vest and beret for their armor values, you at no point mentioned how long you had both.

I went forward with a three-day ban due to the ticket conversation and note history. However, due to my abrasiveness, I will approve this note appeal and will be removing it. I cannot do much for the ban itself as this has gone uncontested until now. However, I will lift the ban prematurely as it has yet to expire on its own. I will leave this thread open for another 24 hours to leave room for comment.
Snitch all of my behavior here, or say nice things I dunno you do you

Spoiler:
Reply PM from-REDACTED/(REDACTED): i tried to remove the bruises by changing her gender

PM: Bluespace->Delaron: Nobody wants a mime's asscheeks farting on their brig windows.

PM: REDACTED->HotelBravoLima: Oh come on, knowing that these are hostile aliens is metagaming