The Hivemind Hosts are what their name suggests, the hosts of powerful hiveminds, that escaped during a recent containment breach and have been at large since. Very little is known about these creatures except that they have great psionic power, and can assimilate unprotected crew into the hivemind, using their minds as fuel for their powers and their bodies as vessels to manifest them through. If the true potential of their psionic power were to be unlocked, they could wreak havoc across the stars. Thankfully, intel suggests that the hosts were forcibly separated from the rest of their minds shortly before the breach, rendering them almost powerless. Now, they take the first steps towards growing back to their former glory, and the crew of Space Station 13 is their target!

Assimilated crew (Vessels) are not antagonists, and are not loyal to you, nor are they converted to your side. Special circumstances my change this.

With that out of the way, Assimilation is the core mechanic of the Hivemind Host. It's a very simple process, click on the Assimilate Vessel power within sight of a target (Closer is faster), select a target from the menu and stand still for however long it takes. Once that's done, congratulations, you have a vessel. If you failed for whatever reason (The target moved out of range, you got disrupted, or the target had a Mindshield Implant) then don't worry, the power's cooldown is refunded and you can try again immediately. Assimilation is completely silent and undetectable, meaning it's safe to attempt whenever you want.

Assimilating crew is the main way to gain power. The more vessels are in your hive, the more powers you unlock and the stronger some of them become.

Other hivemind hosts and you

As a hivemind host, it is incredibly unlikely that you will be the only one on the station. Other hosts may want to kill you, team up with you or simply not care, although the former is probably the most common reaction. Once a host has five vessels assimilated, they obtain Network Invasion, which allows them to probe crewmembers for information. If the crewmember belongs to an enemy hive, they will be able to temporarily track the enemy host, who will be able to track their (former) vessel that just got hacked. If one host assimilates another, the assimilated one will be warned after a minute and boot themselves from their hive after another minute. The assimilating host will be able to track the assimilated for a short period of time, but if you're in that situation don't fret, they can't tell the difference from a vessel being hacked and a host booting themselves. For more information on tracking, see Psychic Link

Hosts also obtain Reclaim at five vessels which will gib any adjacent hivemind hosts as well as granting five extra vessels for the purposes of unlocking abilities as long as they are in critical, something to watch out for when combined with Network Invasion.

The host has plenty of psionic powers at their disposal that affect the minds of their victims. These powers are unlocked after obtaining a certain amount of vessels, and mostly affect the vessels themselves, but a few stronger powers may affect other people, or even the physical world. Even if you drop below the required hive size you still retain your powers, so once you have what you want, go wild.

While not a power per se, hivemind hosts and former vessels can track people for a short period of time in certain situations as if they had a pinpointer. As a host becomes stronger, this ability becomes less sensitive. Using Network Invasion and Reclaim can boost the duration of your psychic links.

If there are multiple valid tracking targets, the nearest and strongest is usually the one to be detected. The more powerful a hivemind host is and the larger their hive is, the easier they are to track and the less sensitive their own tracking abilities are. Using certain abilities such as Bruteforce, Mind Control and Medullary Failure also contribute to this gain.

Adds a target within seven tiles to the hive after a short second channelling period. Time to assimilate varies depending on distance, taking one second when on top of the target and around 15 when a screen's width away. Doesn't work against mindshielded crew, and can be interrupted if you move or they leave the range. A person can be assimilated by multiple hiveminds, a person being in one hive does not prevent others from assimilating them.

Removes a vessel from the hive. Has the same range as Assimilate, but works instantly.

Allows you to see through the eyes and hear through the ears of any vessel. Comes in handy for keeping tabs on your vessels, especially if you want to hit them with a remote power.

Momentarily knock down, shortly blind and mute, and deafen a person you can see. Non-hive members have reduced effect duration.

Summons a hand which allows you to perform unarmed combat at a range of three tiles away. Drop to remove the hand.

Scans the nearby area for anybody that currently has a psychic link with us or that we have a tracking bonus against. Helps you identify enemy hiveminds in crowded areas.

Affects adjacent hivemind hosts by dealing huge amounts of damage if they're unconscious, and gibbing them if they're in critical. Should you gib a host with this ability, you gain a global 30 second tracking bonus to any future psychic links as well as five vessels for the purposes of unlocking abilities.

Deals stamina damage and induces a variety of negative effects to anybody in range of yourself. Incapacitates cyborgs for a very brief period of time.

Creates a psionic forcefield, similar to a wizard's forcewall but larger and lasting less time. This blocks projectiles, and if you stay in the middle, people on the outside cannot reach you with their weapons, but this power will clearly out you as a hivemind.

When activated, Assimilate Vessel will destroy mindshield implants on use but will stun for five seconds post-assimilation. If you're confident you won't immediately get caught, this can help counteract mass implanting as well as allow you to use officers as vessels. Once you achieve One mind, you are no longer stunned.

Takes full control of a vessel's body for 30 seconds as long as your body is undisturbed. Your ability to move is restricted to 14 tiles from the initial point of control, moving any further will cancel the control. If the vessel dies or falls asleep during this period so do you, so be careful. Can be cancelled at any time by recasting, and will partially refund the cost. While using Mind Control, Psychic Link will not activate. If you attempt to mind control another hivemind, you will fail, and be notified that they were a hivemind.

Allows you to set a single, customizable objective for four random vessels of your hive. This power has one use.

Brings the target hive member's nightmares to life, causing them to be partially blinded, and chased by shadowy spectres.

Knocks down any people around you for a brief period of time, and disables cyborgs. The more people affected, the less time it lasts, down to a minimum of eight seconds. This power disables cyborgs for a much longer period of time than Induce Panic. Enemy hiveminds shrug off the knockdown dramatically quicker.

If a hivemind host manages to reach 15 vessels, and has at least 20 more vessels than any other hivemind host(For every host killed by Reclaim, this requirement goes down by five vessels) then they unlock the power of the One Mind. Should they opt to use it, everybody on the station will hear a strange noise as the vessels temporarily black out. After this brief period, the vessels will wake up, this time glowing pink and fully connected to the hive mind's host. 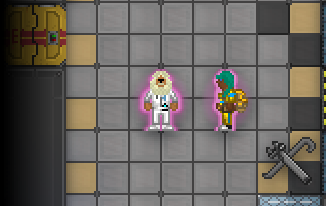 You see these bastards?

They're definitely no ascendants, but their sheer numbers and undying loyalty to the host make them a menace either way. The only power these vessels gain is a hive chat, but that's enough for them to easily coordinate their hordes. The host also gains a pink aura letting him blend in with the vessels, as well as a bunch of immunities to things such as stuns, sleep and hunger. While it's possible to kill an awoken host given that they're far easier to track than before, with their legion of goons, unstunability, and slew of defensive powers, it's a herculean task. For the host, it is time to savour your victory. As soon as you can, give your vessels some orders, whether it be to bring you people to assimilate or to raid hostile departments. You could tell them to kill everybody, but that's no fun, and besides, more corpses means less people to assimilate. Either way, unless you managed to unlock this way too early, with some effort on your part the One Mind will leave you as the uncontested ruler of the station. Have fun!

Should you reach strengths far beyond your peers, and should your hive be large enough, you may unlock the true power of the One Mind.

As for those who are not, they shall be shown the true terror of the word Hivemind.