You start in Medbay. You mess with all sorts of chemicals. That's it. Some of the time you can do what ever you feel like for most of the round or make stuff to deal with the security officers or syndicate fucking with shit in your lab. Be sure to keep the scientists stocked with acid, and keep your nose out of those space drugs!

Bare minimum requirements: Stock the dispenser up with some beneficial medicine before you go off on your own chemical adventures. Give botanists unstable mutagen when they ask for it, and don't give the clown lube! 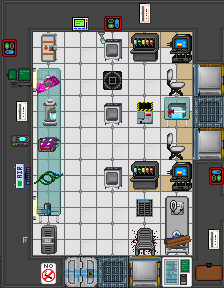 The chemical research lab is located in Medbay. It provides enough work space for two people

Chemists are naturally suspicious individuals. They've got all the tools in the world to break in wherever they desire and/or kill people in all sorts of horrifying and inhumane ways. An easy way to allay this suspicion - whether you plan on doing something suspicious or not - is to make yourself useful to the station at the game's beginning. Any accidents are likely to be blamed on your coworker, then, if you have one.

Tools of the trade

The Chem Dispenser turns electrical energy into a variety of basic chemicals, through magic science. Guard it with your life. If you run out of power, you can disassemble the dispenser with screwdriver+crowbar and rebuild it by first putting the circuit board back, and then all other things but use a full power cell

instead of the old one. Then screwdriver to finish. Or you can charge the machine with an inducer

On some maps the chem dispenser has been replaced with a system called plumbing.

The ChemMaster 3000 can magically separate chemicals, and has the ability to produce a limitless supply of 50 unit pills, 40 unit patches and 30 unit bottles.

The Reagent Grinder is identical to the grinder the Chef has. It can be used to extract chemical reagents from things the Shaft Miners, Chef, and Botanists produce.

The Chemical Heater is important for making many recipes that require high temperatures to mix.

Inside the chemistry locker you will find boxes of pill bottles on some maps. These can be loaded with pills for inventory space efficiency.

Some maps also have medical sprays in the same locker. These can be filled with chemicals by using the ChemMaster. They work as patches and provide an optional way to apply medicine.

On a table is a hand labeler. This can be used to label beakers, pill bottles, grenades and many other things. Actual pills and patches are instead labeled with the ChemMaster.

These are some suggested things you can make. Just remember you can't be certain that these things will actually be used, so if you wish you can choose hold off on most things until you receive requests. Also, if you are using a map with the plumbing system instead of a chem dispenser you may want to focus on mass producing a select few things instead of a bit of everything.

If someone comes and requests something from you, make sure you fulfill them first. No one likes a chemist doing his own thing as they have to stand there waiting. If you are in the middle of something, inform them that you will be right with them. These suggestions were written with an available chem dispenser in mind.

Other things you may want to do

As a chemist you have the tools you need to craft chemical grenades. See the grenade guide to learn how to make them. These can be both beneficial and malicious, depending on what chems you put into the two beakers. When the grenade is triggered the two beakers will mix. Typically you want the grenade to result in either smoke or foam containing other chemicals. To learn the differences between smoke and foam, see Smoke vs foam vs others.

Pills are a great way to give large amount of medicine at once, if you are going to make medicine that will be single serve, make it pill form. Each pill can hold 50 units of material at one time, and up to seven can be stored in a pill bottle! They are even small enough to store in your pockets. Patches are similar to pills, but work in a touch-based way rather than ingestion. Read more about the different ways of applying chemicals under Reagent Delivery.

Chemistry is one of the jobs with the highest harmful potential. With some planning, you can make many different gimmicks as a traitor chemist. A LOT of the chemicals you have access to will kill when injected. Access to grenades is a plus. Search around or experiment for better "hellfoam" and "hellsmoke" mixes.


If you want to make something grand and spectacular though, consider crafting and learning how to use a chemical payload.