You are the Head of Personnel. You are the one on the left. The one on the right is your dog. You are not a dog. Your main responsibility is to sit in your office and listen to people request access to X area or ask for Y job. You are also in charge of making sure that service department is working. Should the worst come to pass, as well, you will need to assume command of the station as acting Captain.

Bare minimum requirements: Learn how to modify Identification Cards and their trims. Stay at your desk for the first 10 minutes and don't wander off far. 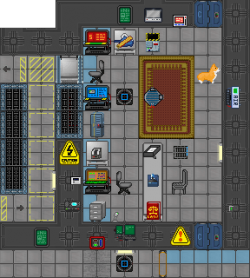 Your office. You sit in it.

Being essentially the right-hand man to the Captain does have its perks. For starters, you spawn in your cozy little office that should keep you sheltered from the derranged lunatics outside. It's almost entirely constructed out of reinforced walls and comes with two layers of shutters to close people out of entering the HoP line (or from leaving it). The only people with access to your office are you and the Captain (usually), so you should be pretty safe if things get messy.

Within your office, you have a plethora of goodies in your locker for the taking, including an Energy Gun, and a couple other things like a door remote for controlling Civilian Access doors, a stylish-looking Head of Personnel themed Cloak and spare uniforms for when you need to disguise as yourself. If you think that wearing a cloak that makes you look like a big egg is the Captain's job, you could alternatively wear your cozy winter jacket. 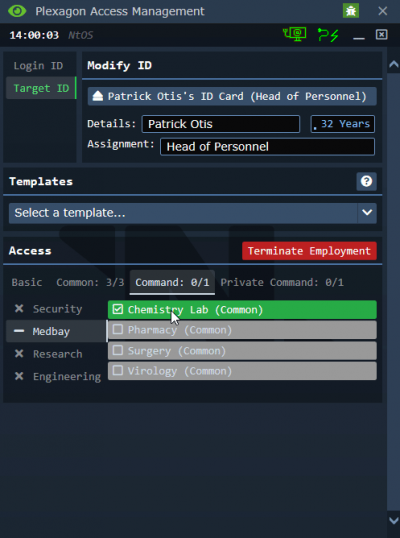 The Plexagon Access Management program of your ID console when logged in and having inserted an assistant's ID to modify.

Your primary purpose is to sit at your desk and process people's requests for access. People often wish to change jobs or require additional access in order to do their job more effectively (or further their dirty Syndicate goals). It's also your responsibility to wipe access from the IDs of troublemakers at the request of other heads.

Skip the first 4 steps if you merely want to grant additional access without changing job.

Remember to log out from the Plexagon Access Management when finished. Otherwise others can stroll up to the console and edit their own access. Simply closing the program doesn't log you out from it.

People will come to you with requests ranging from outlandish to mundane, so use your brain and ask a Head over the command channel for any objections before assigning someone to their department. Note that you will be held accountable if you give out access to a department without authorization from its head. Use common sense: maintenance access isn't a big deal, access to toxins is.

If you repeatedly ignore other heads of staff, adding people to departments randomly or handing out AI upload access like candy, you can and likely will be contacted by an admin. Repeatedly handing out access to others in a way that causes problems for the station will result in you losing the ability to play as the Head of Personnel, so be mindful of what you do with that access computer.

If you're feeling creative, make up your own jobs with custom titles and access levels. There's a world of fun gimmicks you can play around with.

If you plan to use your box of silver ids and a wallet to make yourself an all-access Hero the Station Deserves, bear in mind that access is not equivalent to permission, and security will arrest you and throw you in the Brig or the Captain may demote you if you're seen waltzing into high-security areas you're not supposed to be in. Talk to the head of the department you're visiting, and ask before taking anything valuable. This also goes for people you promote.

The Plexagon HR Core of your ID console has the ability to open and close slots for the majority of jobs. Your ID must stay inserted while using this program. This is useful for opening infinite clown positions oh god situations where no more positions remain available and helps greatly to stem the sudden influx of 20+ assistants clamoring for access. This is also a good tool to use when somebody who has taken a valuable job is either dead, demoted, traitorous or an all-around useless chucklefuck.

You can also mark jobs as priority by ticking checkboxes if you feel the situation on the station calls for extra security/engineers/whatever. Priority jobs are shown to players in the lobby when they choose between jobs. There is a limit on how many jobs can be prioritized.

You're supposed to be in charge of the civilian and supply departments. Nobody in these departments is going to listen to whatever stupid orders you give, but feel free to befriend the Bartender by giving him a chemaster machine, smoke weed with the Botanists, or take a relaxing break on the Mining Outpost. People are more likely to listen to you if you help them out or become friends with them!

If the real Captain is KIA, MIA, or simply never arrives, the Chain of Command dictates that it is your job to start your own secrete police force and make shitcurity a joke step up and assume the position until they return. If this is the case at the start of the round, it is typically wise to make your first order of business the securing of the important items inside the Captain's Quarters: The Nuclear Authentication Disk, and the corresponding Pinpointer. Picking up the Hand Teleporter never hurt anybody as well, considering it makes for a powerful escape tool in emergency situations. Do not forget that you will, in fact, need to claim the spare ID to do so.

If you spawned at the start of the round with no captain, you will recieve the code for the spare ID. If the captain was there at the start of the round, you could maybe find the spare ID code on his corpse if it was not discarded. If neither you nor the captain were there roundstart, the code will be sent down the chain of command to other heads.

The Pinpointer is often best left in the hands of the Head of Security or the Warden so that they can find your battered corpse or the perpetrator of your murder -- or track you down if you give them a reason. If you leave the disk alone the game will eventually give a ghost the job to go take it, so keep it on person. Some maps like KiloStation think it's really funny to have a fake disk spawn on the same place as the real one, just to fuck with you. Use the pinpointer to make sure you got the right one.

Don't take too long to secure the Captain's items, or else the Head of Security or some Assistant will take the mandate of Acting Captain upon themselves. Either way, it's a fight you'll have a hard time winning.

Due to your low workload compared to other heads, it's a good idea to always pay attention to general radio. People will often try to use this to summon you to your office when they need an ID upgrade. Aside from that it never hurts to have an awareness of what's going on around the station. Chat with the crew so they know you're not the stereotypical helmeted all-access mute that has come to epitomize the position.

Just so we're clear. Ian is your little buddy. Protect him from the various dangerous criminals, and make sure he escapes on the shuttle alive. This is your most important job of all.

Taking a Stroll as John Doe

The Head of Personnel's ID can be used to manage access levels for ID cards. Picture the biggest set of crosshairs you can imagine, and then picture them on your back. At the first mention of a potential Revolution, 'get the hell outta dodge as soon as you can.

Thankfully, when Revolution abounds, you will be one of the more well armed and threatening heads. A tendency for disappearing acts makes the Head of Personnel usually the hardest head to kill.

If shit hits the fan and you need to hide, pick a job where it's natural to be wearing a mask that hides your face. Scientist, engineer, mime and clown are all good examples. Make yourself a Captain ID with that job title and a false name. Travel to where the equipment lockers for that job are kept and get dressed. Put your old clothes and equipment in your old backpack and put it into the locker, locking it after you're finished. If you leave your Head of Personnel's jumpsuit lying beside an open Engineer locker, anyone who sees it will figure out what you're disguised as. If you want to be an even more stealthy HoP, head to genetics and turn a monkey into a human. Proceed to stab yourself with the UI+UE of said monkey. Then just go and use your ID console to get an all-access ID with your new name on it.

If you're the last remaining head, in the interest of fair play, you should try to escape the z-level instead of extending the round for your own benefit at the expense of all the dead people stuck sitting out. This will cause the revolutionaries to win, but you will survive. Self-preservation is a valid reason for ending the round. Fuck that shit, grab the nearest blunt object or gun and go out in a blaze of glory.

Reports of a potential Blood Cult? Not a good sign for you, being a Head of Staff.

You have the ability to mass produce paramedic IDs, and you do not start the round mindshield implanted. As a result of this, you are a prime target for conversion. As soon as you hear that a cult has been discovered.

On the flip side, if you are a starting acolyte for the Cult, you can easily set up some fake job changes to hand out extra access to your brethren.

Short of a Chief Engineer tasked with stealing his own blueprints, traitor HoP is the easiest traitor job on the station. Give yourself some more access card, use cargo for free guns, try to become acting captain and turn the station into your personal playground of terror.

You can do a few fun things: