The Lawyer is tasked with the thankless job of providing legal aid to the crew. This tends to involve defending Traitors in trials, suing Security or the company or aliens or anyone else they can think of for endangering the crew. Other duties include hassling the engineers and scientists over health and safety violations, and general ambulance-chasing.

Bare minimum requirements: Talk to prisoners and speak to security on their behalf if asked. Encourage the warden to reduce overly harsh sentences. Represent aggrieved crewmembers if needed. 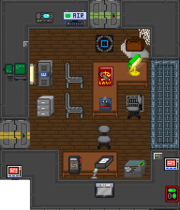 The Law Office, where you can be safely ignored

You begin the round in your office with a blue or purple suit, Brown shoes, a briefcase, With 6 pieces of paper and a pen, a PDA, a Security Radio Headset and a Box.

You'll need to ingratiate yourself with Security personnel; otherwise your shift as lawyer will likely be fruitless and painful. You have virtually no physical power, but you can accumulate social power. Greet them when you first see them, use titles like "officer" when referring to them, say please and thank you, and generally try to roleplay a friendly fellow crew member. Don't let your speech imply authority, though: your Head is the HoP, not the HoS. Make it clear that your function is to uphold justice, the welfare of your clients, and the good of the station. Do not abuse your security headset or sec will at the least take it away or at the worst brig you for it AND take it away.

In fact, it is advised that, as a lawyer, you not attack Security personnel at all, even when they deserve it (fleeing is acceptable). While it may help in the short run, future shifts may have random beatings if you are seen as a threat. If you're having trouble, seek the HoS's, HoP's, or Captain's help, as appropriate.

But if you can't be bothered to do your job, or more likely nobody is calling for you to help them, then you can always just get some tools from the tool storage and redecorate your office.

I would like to announce that I believe my client to be a DISGUSTING TRAITOR, and I resent the fact that I've been given the task of defending him. You should probably just toss him out of the airlock or something, I rest my case sir.

As a traitor, you have closer ties to security than anyone else. Officers may go into the break room alone, and make themselves vulnerable to attack; reducing the number of officers may help even when they aren't your target. Your briefcase can fit the contents of a toolbox in it, but is considerably less suspicious than carrying a toolbox around. It is not difficult to stuff it with handcuffs and flashbangs if you can acquire them from Security storage. You can also hear security radio, which gives you a lot of intel.

Overthrowing Rulers for Fun and Profit

As a Revolutionary, you have access to sec, with the possibility of dragging away revolutionaries. Very quickly though you'll end up being implanted if you're not fast. You can also use a screwdriver, and give your headset encryption to Rev Heads, helping them listen to security radio, which gives a lot of intel during a revolution.