From /tg/station 13 Wiki
(Redirected from Lizardpeople)
Jump to: navigation, search

Not to be confused with the little lizards.

Sentient non-humans hired by Nanotrasen to fill in gaps in their Human workforce. Lizards are barred from serving command roles on Nanotrasen stations and are not protected by Asimov's laws of robotics.

Functionally Lizards are nearly identical to Humans mechanics wise, but they suffer from lack of protection under Silicon Laws and they tend to be looked down upon by most of the (human dominated) crew.

Echoes of Humanity's dark distant past and their treatment of alien species remain well entrenched in modern day Human society. All alien species, including Lizardmen, have always been treated as second class citizens in Human society. 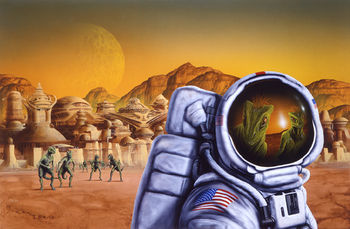 Artists Impression of first contact between Humanity and Lizardkind

In 2550 Nanotrasen made history with the creation, and signing, of the Species Equality Act which paved the way for Lizardmen to be hired into low level jobs on-board Nanotrasen space stations, typically janitorial positions, as well as being the first corporation in existence to sign such a act. However in 2554 a amendment to the Species Equality Act, known as article 66, authorized the promotion and hiring of Lizardmen into most available station based roles.

This proved to be a significantly controversial amendment that was met with great disapproval, undeterred the change was pushed through by Nanotrasen. However the threat of the United Earth Government terminating Nanotrasen's top secret plasma mining contract forced the addition of article 67 which barred Lizardmen from assuming a command level role outside of extreme circumstances. Nanotrasen was quick to use their new Lizardmen employees to shore up gaps in their workforce.

The top secret Space Station 13 was no exception.

This is a record of the history of the major space lizard clans, who have existed for millenia alongside humanity in this universe but have only encountered each other for the last hundred years. While human history records are very accessible and common in human civilizations, the same cannot be said for the history of the lizard race. This book will make lizard history more accessible to those interested.

While lizard civilization varies greatly, a substantial part of lizard life was made up of the great lizard clans. Such clans were the equivalent of human dynasties and ruled worlds, solar systems, even entire galactic subsectors. The largest clans were the Warnow, E'play, and Knoises clans. All three clans still exist and command considerable influence over the Kalixcis Sector, even in the age of human megacorporations superceding most traditional forms of human government or rule.

In any case, the survival of the three great lizard clans to this day is a feat in itself. Although they consider each other allies in the face of human corporations, the three clans had only ceased outright hostilities only in 2124, a full century after their first contact with the human race. Like the human race, the lizard race under the great clans would engage in perpetual warfare in some form or another. The great clans warred with each other often. Local civil wars between minor clans, proxy wars waged between competing clans, all the way up to large-scale sector wide conflict, were all carried out to benefit one of the great clans.

Lizardmen names are based on Verbs-The-Nouns, an example being Eats-The-Lemons or Stuns-The-Perp. There are no enforced restrictions on a name a Lizardperson can use (sans standard name rules) meaning you do not have to adhere to the Adjective-The-Nouns system but you should.

Generally Lizardpeople tend to form close knit communities with other Lizardpeople, and they tend to be wary around Humans, due to a combination of the limited amount of Lizardpeople on station but also due to the harsh treatment their species suffered hundreds of years ago by Humans. While many Humans are somewhat racist towards Lizardpeople many Lizards tend to hold little ill will towards Humans, however some Lizardpeople are oft just as racist towards Humans if not more so and are usually singled out as such.

While the central United Earth Government enforces harsh policies against Lizardpeople, and Nanotrasen exploits the unwanted status of Lizardpeople for financial gain, some fringe and even criminal organizations are surprisingly welcoming toward Lizardpeople, whether this is due to them being genuinely progressive or them simply needing anyone of the right skill sets to work for them, the attitude is appricated among the Lizardpeople that work with them and usually ensures a near unbreakable loyalty.

Amusingly Lizardpeople who work with Nanotrasen Security forces also near universally show a near unbreakable show of loyalty to their team. However this can be more attributed to how NT Security heavily emphasizes friendship and cooperation between security personal which thus encourages high loyalty, that and a big pay check.

Lizardpeople are a optional playable race. You can make a lizard character in the character panel, and change aspects of its appearance such as skin color, spines and antennae. Lizards attack with their claws to slash and hack people, though this does not deal any additional damage. They also tend to hiss when talking(because of their tongue) and are more resistant to heat and less to cold.

Random names for lizardpeople are hypenated. They are generated by taking two names from a gender-specific list of lizard names.

Note that as a lizard, the AI does not consider you human and is not obligated to listen to you and an Asimov AI will often respond lethally should they find you harming a human, however this also means the AI can allow you to put yourself into harm's way in a positive manner, such as opening an airlock exposed to space to save someone. Also, certain crew members will show you depths of racism previously reserved for the clown. Centcom also maintains a strict "Human-Only" policy for Command Staff appointments. But hey, special snowflake colors!

You can speak in Draconic, a language understood by lizardpeople (as well as silicons and the Curator) by preceding your speech with ,o. To speak on the radio in Draconic, use the radio code first, i.e., "; ,o Hello lizardsss!" You can also set your default language to Draconic with the language button on the HUD. WARNING: Speaking in lizard language around humans has a high chance of making the humans hate you. Even more than usual.