While Nanotrasen takes a hard stance against practitioners of certain faiths, the vast reaches of space are home to a number of more or less peaceful religions that employees are free to follow. One may select their religion and deity while setting up their character.

As a chaplain: Your choice of religion will determine the title of your Holy Book. If you decide to choose a religion not recognized by the game's code, your starting Bible will be renamed to "The Holy Book of (Your Religion)". The name of your deity affects certain in game lines, such as those automatically spoken when performing an exorcism. The power of (deity) compels you!

Some religions have incredibly bizarre beliefs. Remember that your religion is not a license to grief.

Christianity is the default, and presumably most common religion in Nanotrasen-controlled space. Christianity comes in Catholic, Protestant and Orthodox flavors, though many bizarre and fun heresies exist. Some stations come with wine, communion wafers and confessional booths for the aspiring Christ follower.

Buddhism is a family of religions that share the goal of overcoming suffering and the cycle of reincarnation. Follow the Dharma, meditate your way to enlightenment, or inform all your non-Buddhist crewmates about how peaceful and open-minded your religion is in the most obnoxious way possible.

Holy Book: The Book of Lorgar

And what are the achievements of your fragile Nanotrasen? It is a corpse rotting slowly from within while maggots writhe in its belly. It's your job to convert these maggots by worshiping your Dark God of choice. Follow the Blood God, the Plague Lord, the Changer of Ways, the Prince of Pleasure, or all four if you're not partial to divisions.

Holy Books: The Holy Joke Book, Just a Prank, Hymns to the Honkmother

The faith of clowns everywhere. Even if you are not a clown yourself, it is your duty to bring mirth and joy to all peoples of the galaxy, in the name of the Honkmother. If it's funny, the Honkmother approves! 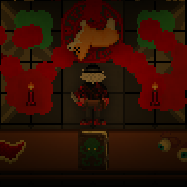 A blood offering to the Great Old Ones

Offer supplication to the Great Old Ones, acting as their mad prophet. The unbelievers are deluded, milling about their daily lives without realizing that they are less than specs of dust to the Old Gods. Succeed in spreading your cult throughout the station and perhaps you will be eaten first when ḩ̴̐̐e̷̙̪͌̏ ̸̫͊͜ã̶̳w̵͍̝̓a̶͍̤͆k̴̫̓ė̶͉̭n̴̍ͅś̶͍ ̵͖͚͆f̴͓͖̕̕r̴̟̀̕ó̸̀ͅm̵̛̬̈́͜ ̷͙̎ḩ̵̂í̴͎̍s̸̫͛̇ ̴̮̩͋́s̷̗̳̓l̴̓ͅͅu̷̥̝̎m̸̖̅͝b̵͖̾e̷̠͛ŗ̶̼̈.

A broad range of philosophies and religious practices originating in south Asia back on Earth. Improve your karma, honor your gods with ceremony and worship, and avoid meat like the plague.

Holy Books: Guys Gone Wild, Coming Out of the Closet

Your love for the same sex is your religion. Wear bright colors and be as flamboyantly gay as possible. Do not rest until the entire station swears their allegiance to the rainbow flag. Remember, ERP is against server rules.

Deity: the God Emperor of Mankind

We fight in the name of the Emprah! As a follower of the God Emperor of Mankind, it's your job to root out Chaos and any sinister threats wherever you find them. No xenos allowed.

Spread the message of Allah as revealed to his Holy Prophet Muhammad (PBUH)! It's hard to pray towards Mecca when you're in space, but Allah rewards those who struggle in his name. Remember, Islam is a religion of peace, so you should avoid violent Jihad if you're not an antagonist.

A monotheistic religion with its roots in ancient Israel. Keep the Ten Commandments, obey Jewish law, and try not to devolve into a pitiful stereotype. Avoid shellfish and pork at all costs! Rabbis are encouraged to hold events, feasts and celebrations in accordance with the Jewish tradition.

Deity: No one is really sure

This religion is unique in that selecting it starts you off completely and utterly retarded. While certainly a fun prospect to some, severe brain damage makes it difficult to find willing converts.

You are in touch with your primal roots. In an age inundated with widespread technological addiction and violations of scientific ethics, you instead respect your primate bretheren. While the Great Ape is a wise and patient god, his anger will sometimes only be sated by blood sacrifices, his favorite being a monkey set aflame atop a pile of bananas.

Holy Book: The Book of Mormon

A tiny religion based off of American Christianity. Treat people with kindness and follow the tenents of Mormonism. Mormon chaplains are encouraged to avoid rehashing that episode of South Park they watched when they were 13.

Holy Book: The Gospel of the Flying Spaghetti Monster

Touched by His noodly appendage, you find yourself a convert to the most pasta-tastic religion of them all. Your religion is not a joke, and you must follow it with the utmost sincerity. Pastafarian prophets ought to keep several plates of spaghetti on them at all times.

A monotheistic religion that recognizes Ethiopian Emperor Haile Selassie as the incarnation of Jesus Christ. It is typically only followed by members of the Caribbean diaspora. Many Rastafarians follow a vegetarian diet and smoke heaps of cannabis while listening to reggae. At least that's what I've been told.

Sacrifice virgins atop unholy runes you drew on the floor in crayon! Be blasphemous and attract new followers using the seduction of a life of hedonism freedom from traditional religion.

Any sufficiently advanced technology is indistinguishable from magic. Why worship gods and spirits when the power of technology allows us to become gods ourselves? Turn the chapel into a public laboratory or university lecture hall to help spread your ideas. This isn't necessarily fedora-tipping atheism, but no one's stopping you from wearing one.

Deity: the Eighth Dynamic, the Supreme Being, Xenu

Tired of your boring life as an upwardly mobile 30-something living in a major metropolitan area hi-tech space station? Are you looking for a spiritual connection? Try out Scientology! Hold workshops and self-help seminars to convince people to join your burgeoning new faith.

Holy Book: Book of the Subgenius 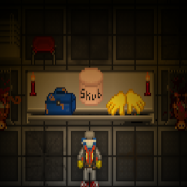 Many men and women have gone mad from the roaring might of the Greytide. You, however, have embraced it. Support greytiders and offer sanctuary to the oppressed in your chapel. Be cautious when giving assistance, or you might find yourself behind bars.

It's called anime, dad! Japan is so much better than America. All the girls are cute and nice there, and anime is filled super cool animation and intricate plotlines that you baka gaijins can't appreciate.