You are the Commanding Officer of the TGS Theseus(or whichever shipmap was chosen this time), on a mission to investigate any distress calls and occurrences reported to you by the TGMC High Command. This job should ONLY be attempted by experienced players! A good and coordinative Captain along with his/her Field Commander is crucial to mission success! A bad performing Captain would not do the following things,

Do note that you should refrain from leaving your vessel at all costs. You leave the job of coordinating the Marines on the ground to the Field Commander. Your Synthetic is here to assist you and the Marines on mission success, so be sure to abuse use them to the best of their abilities. You are apart of the Terra Gov Navy, along with other shipside roles. You also should watch over but don't dwell on the Chief Ship Engineer, and Chief Medical Officer, because your heads of staff are there for a reason.

Remember you have the final say in all situations aboard the ship unless overruled by lawful command, normally the TGMC High Command. Be sure :that if you need to deal with duties at the field due to certain situations, if your field commander is out of action or unable to do their duties, you place someone next in line to do so. If you can't, you may have to deal with the situation yourself and listen to overwatch.

As the Commanding Officer, you will be tasked with briefing the Marines on the mission they will be partaking in. They will be hosted over announcements or over the radio. 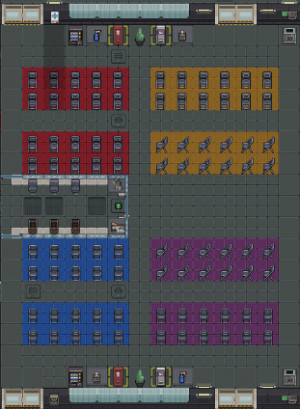 The briefing room is more of a traditional way to brief the marines about the distress signal, but other ways to inform your marines are as follows:

After you have held the briefing, you should leave your Field Commander to delegate with squads and other ground side troops. The briefing room contains multiple objects which may be useful to you in case of certain issues such as the marines being unruly, which can be the flash. Do NOT abuse this tool as it can flash the entire vicinity, if Military Police mob rule can't handle the issue, then the flash will be encouraged to use to quell it.
note: not all shipmaps have briefing rooms.

Do not let the briefing take too long, give it about 5-8 minutes or so. You don't have to hold up the mission with a whole essay, just make it shorter. If you are going to make it short make sure it's getting needed information to the marines, because if you just say something in about 5 seconds or so, it wouldn't be beneficial to the marines. Give what is necessary, just not what isn't needed. Things to announce include the LZ you will be deploying the Marines to, and the time of deployment, among other things.

The Captain will be mainly shipside while monitoring the situations on the ground and on the vessel itself, which means they will be staying at the Combat Information Center, or CIC for short. You will find your general quarters and study to the northeast of the inner CIC, and your post in the middle of the CIC.
note: layout may differ depending on shipmap

In your command post, you will see mostly consoles and an overwatch, meaning you technically don't need to move anywhere to see what's going on. If you really need something sorted out, report it to the acting command of that department, such as the reactor not being powered on, then consult with the Chief Ship Engineer or Ship Technicians if the Chief Ship Engineer is not available. You have access to the Dropship Alamo console, which can go to two Landing Zone's. Landing Zone #1 and Landing Zone #2, and may be redirected to the Theseus Hangar One.
You have access to close/open shutters in the armory, CIC, or the hangar depending on certain situations which they need to be opened or closed. Normally shutters for the hangar will need to be open immediately so the marines can start moving around the hangar to get to their assigned dropships.

Trusting your heads of staff and other comrades to do their job makes yours a lot easier. You do not need to intervene unless the present command is not performing their duties or are falling behind their tasks. Letting your fellow crew work without you being on them all the time is essential, mainly you could nudge at your heads to do a certain thing, but don't delve in deep like you are the one who should be running the grunts, that's for your Field Commander to be worrying about.

If you plan on going groundside, remember that you are a valuable asset and should be careful. Do not wander off without a helmet and with all seriousness, do not wander off at all, there are multiple threats to worry about in a distress signal and losing yourself to the enemy is a massive blow to morale and structure! Being groundside to fight is fun and all that, but remember that you command the vessel and overlook the ground, not go down there yourself. don't. absolutely don't. Captains are entirely forbidden from leaving their ship.