This is a basic guide to tips and tricks of building a FOB during combat operations. This could mean the difference between Fort Knox that can last against a xeno attack for hours and a couch fort that crumbles at first contact.

First lets talk about how the FOB is supposed to function in game-play. FOB stands for Forward-Operating-Base. As the title suggests, it is meat to operate as a offensive base used to creating a hard-point for static defenses, resupply, and observation of enemy movement. This means that it must be capable of withstanding counter-offensives, resupply the marines, and is able to keep track of enemy movement, in this case, xenos.

Lets talk about how to set up the backbone of a FOB, the barricades. 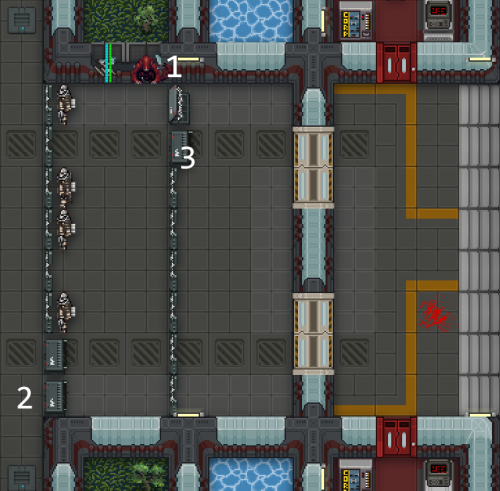 There are many things wrong with this setup.

Having even one weakness in a defense is asking for it to be exploited by the xenomorphs. Make sure to seal up all the weak points like vent exits, windows, and always make sure to raise the plasteel barricade back up if you are not using it (More about plasteel in defense section)

2. The barricade lines up with the walls.

3. Plasteel barricades are not lined up.

If the plasteel barricades are not lined up, it will cause congestion. This is terrible if the marine has to make hasty retreat from an offensive, and they are unable to retreat to the Alamo quickly. Plasteel barricades should be lined up to remove as much space between each barricades.

A better way to have set this up would have been this.
Insert Image here

We can't always stay at the base to defend it, and sometimes we lack the manpower to defend all of the FOB. This is where static defenses come into play. Marines have access to many static defenses.

Anything that can be used to deter hostile offensive is great for this role.

Barbed wire is the most common type of static defenses. It is cheap to make, only costing 2 metal per wire, and can be transformed into razor wires, which is great for keeping your main walls alive. It deters xenos as it damages them when they attack the wire, and it also increases health of the barricade it is applied to.

Automated turret is next. They are versatile, powerful, and very effective at keeping small skirmishes at bay. They are mostly used to make up for the lack of manpower at the FOB. They are much harder to acquire than barbed wires, but they make up for the fact that they are ranged and can effectively replace marines in times of need.

Heavy Smartguns are force multiplier for marines. A single marine on a mounted gun effectively becomes an automated turret, as the mounted guns have high DPS and large amount of ammo ready to fire. Because it is a smartgun, it has IFF, meaning that marines do not have to worry about friendly fire from the mounted gun (though humans without a marine ID will get hit). It is fantastic for pinning down a chokepoint.

And lastly, explosive devices. These are great as the xenomorphs will not be used to dealing with traps, especially claymores. Claymores are extremely powerful, as it can stun a xenomorph that gets in front of it, and can even kill it outright if their health is not full. These are perhaps even better at keeping skirmishes at bay, as xenomorph castes with low maximum health can be one shot by it. Do not put claymores near the barricades as xenomorphs will set these off and damage the barricades. Use a multitool to disarm claymores.

Now that the construction of your mighty base is finished, it is time to work on actually defending the damn thing.

Barricades except sandbags can be repaired with torch, and far more damaged cades can only be fixed with additional material on other hand

Resistance against any melee attack, including crusher charge

PB can be connected, use crowbar to connect 2 adjacent plasteel barricade

Sandbags can be filled with sands from dirt, using entrenching tool on it

5 sandbag = 1 sandbag barricade = one use of entrenching tool

sandbags also can be wired too

to fix sandbag, you need only more sandbags

Sandbags are quickly placed, and under situation of boiler bombing, is a great sealant to protect actual walls.

There ways to deploy razors, which are - razorwire grenade(3x3 round shape), razorwire canister(approx. 5x5 round shape) or construct it (barbed wire + metal rod)

Razors are similar to barbed wire, but it can be connected to powergrid and deal electrical shock whoever attack or charge on it when cables are connected underneath. Barbed wires are not capable of this

However, xenos with spaying acid ability can easily remove razors.

Turrets can be obtained from the TerraGov Tech Engineer System Vendor and requisitions.

In order to shoot through sentries, the marines must be in aim mode. Sentries can be damages if someone's bullet path without IFF, or aim mode, hits sentries.

Turrets can not attack enemy standing adjacent, so keep them 2~3 tile away from fortification. Turrets explode upon destruction, damaging similar to antipersonnel mines.

RADIAL mode means that turrets turn when they recognize enemy on different direction they were set up and will turn direction accordingly.

A deployable, semi-automated turret with AI targeting capabilities. Armed with a M30 autocannon and a 500-round drum magazine. It is the most expensive sentry, costing 100 points. Its burst shot goes up to 6 shot and can be repaired by using a blowtorch. Use wrench to move it or anchor it down. Use screwdriver to rotate it. 4 Burst is ideal for accuracy, as 5 or 6 burst will sometimes miss.

A deployable, automated turret with AI targeting capabilities. This is a lightweight portable model meant for rapid deployment and point defense. Armed with an light, high velocity machine gun and a 500-round drum magazine. It costs 40 points from requisitions, burst up to 5 and easier to set up. Can be fixed by using a blowtorch. Use wrench to move it or anchor it down. Use screwdriver to rotate it.

A deployed and mounted heavy smartgun, ready to rock. While it is capable of taking the same rounds as the smartmachinegun, it fires specialized tungsten rounds for increased armor penetration. It's basically a stationary smartgun, with an added scope ability that permit you to see 3 tiles ahead, 300 ammuniton, and superior damage. Ammo can be ordered from req for 10 points each.