You are the Supreme Builder of the hive. Compare to the virgin combat drone, you are a chad, master of the robust resin. You construct in your infinite autism (or stupidity) to ensure that xenomorphs have map control over the marines.

As the Hivelord, your duties remain similar to those of a Drone:

However, compared to a drone, your new profounded abilites to wrap the map to your design bring new expectations from you:

You make the defense for the hive. To protect spawning pools and xenomorphs in the front line, you construct resin structures that limit marines' mobility and firing lanes. 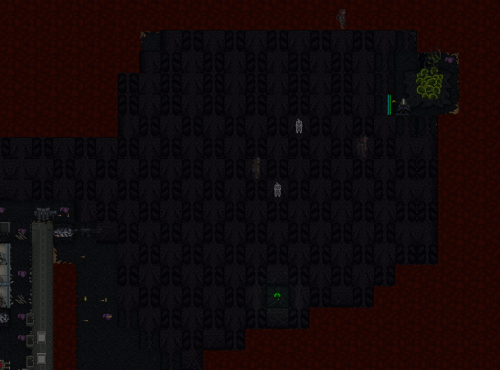 To counter flamers destroying resin structure, the checker board resin structure ensures that flamers have to elminate one layer at a time rather than several

You are the weed master. You and the hive rely on weed. If you're somewhere without weeds, you should plant them as efficiently as possible since due to your movement speed slowdown off of weeds. Weeds spread from a resin sac to form a 7x7 square minus the 4 corner tiles.

Resin walls are your friends. Use singular pillars of resin to provide the faster CQC caste,(Runner, Hunter, Ravager, Warrior, Defender) a place to not only protect themselves from Marine fire but also provide them with a place to draw them into melee. Remember to place jelly pods when able, they are a major asset to the hive in the form of fire protection, allowing runners and other melee classes to take it to the flame-thrower wielding specialist. Just keep in mind, if you do a "Killer Pillar" type of defense, your lowering the effectiveness of the Boiler, Crusher, And Bull, so keep that in mind while your building.

Using your dig tunnel ability, you can create links to virtually any tile on the map that operate as fast travel points. Unlike vents, xenos can crawl through these with humans in their stomach. Your thick resin walls are much stronger than the walls the queen or drone can build, and you are able to build in a 1 tile radius around you unlike the drone. Your Hivelord Speed ability lets you move quickly on weeds, allowing you to quickly move in and out of fire lines to build walls, pushing up on marine firing lines, or to slow down marine pushes.

Tunnels connect xenomorphs to endangered silos. All silos have tunnels, and when they are endangered, it is expected to reach the silos ASAP.

When marines are pushing into the hive, make sure to toggle your Hivelord Speed, and flank them to discourage rushing. You are integral in your ability to rebuild recently destroyed defenses, and sticky resin fields. The more you build, the more you destroy the marines morale.

You can only evolve into defiler at this point, which can be a strong boon to the hive. However, if there are already 1 or two Defilers, the hive would be much better served by you staying Hivelord, and creating tunnels, and Thick Resin defenses.
Maturity increases stats as follows.