After the Hive experiemented with psychic potential from the sacrifices of many humans and xenomorphs' lives, they have created a caste like no other, one that have acquired heighten cognitive power to expand the resin world with its mind.

The Hivemind is the only non-corporeal xenomorph that support the hive by building resin buildings, planting weeds, and healing critical/wounded xenomorphs. Barely any marines seen the glowing tower that is the Hivemind's core given that its true body is far from the frontline and behind a fortified and clandestine location.

You are essentially invisible to marines until they find your core. You want to make sure that marines don't destroy your core.

Ensure that before evolving into a hivemind, you as a drone do the following: 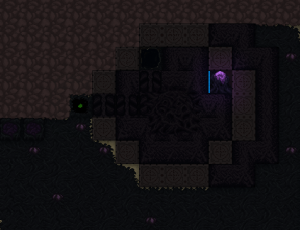 An example of hiding the hivemind

Ideally, get to mature hivemind before 12:25 so that you are ready to heal xenomorphs when marines open shutters.

To receive xenomorphs' assistance, have a Hivelord build a tunnel and plant acid wells near you. The acid wells will alert them that marines are nearby, and tunnels let xenomorphs quick travel to ward off marines from your core.

The responsibilities of the hivemind are but not exclusive to:

The Queen gives up her overwatch role, but not her overwatch ability, to the Hivemind. You protect the hive with information that can be weaponized, quick reflex to heal horizontal xenomorphs, and building walls to block marines' retreat (or accidently your own sisters' retreat).

Pheromones for their respective castes also grow in strength along with growth levels.