As Pilot Officer, your primary duty is piloting one of the dropships in order to transport the Marines. this can be a very boring and repetitive job, because all you have to do is click two buttons. The Alamo can be controlled with external consoles, but only YOU, the PO, can fly CAS missions properly, which is a significant firepower boost to the ground forces.

First of all, you have to decide what you want to do. Either you do transport and make sure the Marines get to the planet and back to the ship. Or you want to support the marines on the battlefield with airstrikes via Close Air Support (CAS). 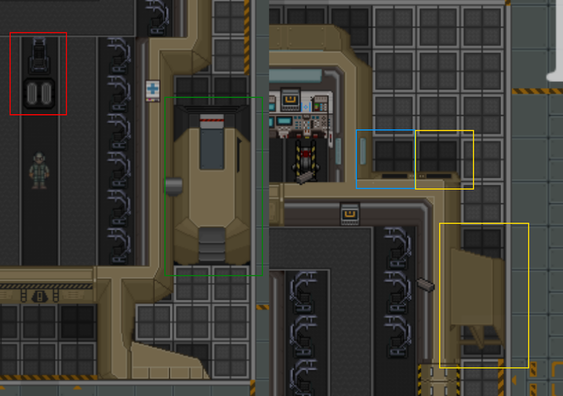 East of the Hangar is the storage room, it has two powerloaders and various weapon and upgrade modules for the ships. To the east is also the machine to produce more Ammo and Modules. North of the Alamo is the Ammunition-Storage. This is where the CAS Ammo is stored that is available at roundstart, as well as some other starting modules.

Piloting each dropship is fairly easy, you just have to click a few buttons and wait.

In the cockpit of the Alamo you will find the three main consoles.

You will climb into the Condor's cockpit directly and be presented with a single unified console with a list of options.

Additionally you can inform medical (:m) about any wounded marines coming up, or you can communicate with a squad directly (:q, :b, :c, :d) to coordinate. You may also have to coordinate with the Requisitions Officer (:u) depending on his competency and budget.

Close Air Support, or for short CAS, is your way of helping the marines. You can rain down hell on your enemies if you want to. But, for that the groundside marines need tactical binoculars or a lit CAS signal flare to laze a spot for you to bombard. Communicate with the squads accordingly to make sure they know CAS is available.

But how do I kill my enemies, you ask? That is simple, first you obviously need to install the weapons to the dropship of your choice, normally it’s the Condor, because the Alamo is only rarely in the air. Note that the weapons you install are unloaded, and need to be filled with the ammunition from the ammo-storage room.

Then enter your cockpit, and wait. Make sure that somebody on the ground is aware that you are ready for CAS. Turning your engines on and lifting off pre-emptively gives you a better response time at the cost of inevitable downtime.

Once CAS is required, launch the Condor, select the weapon you want to open up with, and click "begin fire mission". You'll enter a map overview mode like the AI or Overwatch terminals where you can see anything within camera range of the ground forces, as well as the spot around the laze and the signal flares. You can fire on ANYTHING in sight of any marine on the ground, but all of your weapons will be danger close without the added range of the laser dot - this might not matter if your camera coverage is coming from a corpse's still-active helmet camera. Note that a lot of weapons have some degree of inaccuracy, especially the GAU and Condor rotary cannon, but these two also hit ridiculously hard. All weapons are accurate except for Illumination Flares which have a degree of inaccuracy.

If your fuel runs out, you'll land back on the ship automatically, but if your weapons run dry you'll have to land manually (remember to turn the engines off) and regardless you'll need to reload your weapons for the next CAS mission. You'll also need to refuel the Condor by using jerry cans on the cockpit - you can refill the jerry cans themselves with a large welding fuel tank, but not the backpack-sized ones. You can also purchase replacement ammunition at the dropship part fabricator.

The Tadpole is a smaller version of the Alamo, designed to be able to land anywhere on the map that has an open roof and the space to accommodate the Tadpole.

The Tadpole can be used by anyone with Alamo access, and can be fitted to perform a few roles, such as providing supplies to the frontlines, evacuating the wounded and deceased, hauling xenomorph corpses and Mining Drill repairing.

The Tadpole is outfitted with 2 weapon slots commonly equipped with deployable sentries as well as an interior module slot, allowing the usage of a surgery table or Mounted Smartgun.

The Dropship Part Fabricator is the most important piece of equipment. It is used to make the modules and ammunition for the Alamo, Tadpole and Condor.

Spend your points wisely, they take a long time to replenish (1 point every 2 seconds)

This is a list of all the available modules and what they do. Most of them are available at roundstart, but more can be purchased from the Dropship Parts Fabricator.