As the Staff Officer, you are supposed to be the highest ranking person onboard the ship second only to the Captain. You are in charge of the Operation in case the Captain hasn't woken up from cryo, or is otherwise rendered unfit or incapable of doing his duty. Your duties include Overwatching the various squads, giving them orders, using your Tactical Binoculars to mark for fire support, and in extreme cases, manning Requisitions or loading the Orbital Bombardment cannon in case of the lack of personnel. The Staff Officer is among the most versatile of command roles, but you really shouldn't be doing something if there's someone far more capable to do it for you.

Overwatch: Being the intel officer 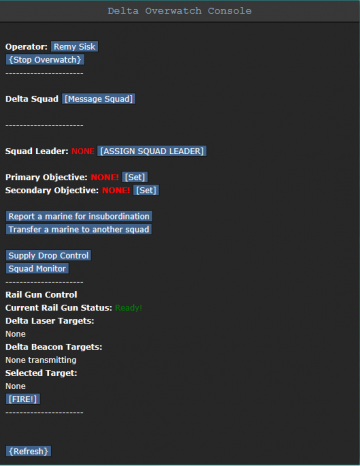 This is going to be your primary responsibility, and what most people expect the Staff Officer to do. Your bread and butter is the Overwatch Console, located in the Combat Information Center(CIC}. There are 4 of these consoles, usually one for each squad. However, there are cases where there are only 2 squads active. The Overwatch Console allows you to do several things:

So a squad leader has charged headfirst into a xeno ambush and had his face bitten off. Oh no! Who will lead the squad now? Well, that's up for you to decide. By pressing the Change Squad Leader button(or Assign squad leader if there isn't one yet), a list of all living marines in that squad will appear before you. You can now choose what (un)lucky son of a gun gets to be the squad's new compass role model! While usually you would assign whoever is the highest rank to become the ASL, the console doesn't tell you the marine's ranks(yet), so common practice is to just ask the squad over radio who wants to be the new SL, regardless of their rank(though again, final choice comes down to you. if they disagree, they can suck it for all you care). The selected marine will gain the ability to Give Orders and have all other marines' SL pointers point to them, as well as gaining loud mode in comms and access to the command radio channel.

You can set a squad's primary and secondary objectives by pressing the button(should be obvious). This will alert the squad members that a new objective has been set, and that they can see it in the Status tab. Thing is, most marines don't bother even looking at the tabs, so most players usually just use the objectives mechanic as part of a gimmick. The most used order is something along the lines of "kill everything" or "don't die". Feel free to put whatever in there though. Who knows, maybe, just maybe, someone might actually listen to it!

Someone suddenly cries over the comms: "aw man, Alpha? really? i wanna be with those cool Deltards!"(said no one ever). Well you can help them! you can transfer a marine from the squad you are overwatching to any other squad using the Transfer a marine to another squad button(if that wasn't clearly obvious). You can also use this to consolidate squads with very little personnel to larger squads to help with organization. This is especially useful in low-pop games where some squads may even be left with only one person.

Using the Squad Monitor button, you can see the name, role, state, location, and distance from the SL of every single marine in a squad. This can help you get a general idea of what the squad is currently up to, and whether or not they are getting hopelessly bodied by the xeno force. You can also click on the names of any marine to teleport the overwatch camera(more on that later) to them, so you can watch in horror as the marine you clicked on is getting crushed, ravaged, flung, and defiled while being hit with copious amounts of friendly fire at the same time. Ouchie!

Sometimes the Alamo just isn't fast enough to get the supplies the troops desperately need groundside in time. So, urgently needed supplies can be sent down quickly via a Supply Drop. For this, There needs to be:

The console will tell you which of the prerequisites have been met. You can also set the drop to be offset from the Beacon, though this is only situationally useful. Most times, it's okay to just launch it where the beacon is. The beacon and the supply pad the crate is put on must belong to the squad you are currently overwatching. if not, you'll have to switch which squad you are currently overwatching. Unfortunately, the supply pad doesn't accommodate the delivery of people. That's what the Drop Pods are for.

How Not to Railgun the FOB: a Guide

In the rare case that your access to firing the Railgun is actually needed, you have to check the target area first before you fire as to not accidentally hit your own guys with it. You can click on the target option to see the area surrounding the target. Of all Friendly Fire possibilities, Railgun FF is second only to the OB in severity. It happens so often, we have a special soundbite for this exact situation. Pray that The Gods don't play it after you fuck up.

By clicking on either the SL's name or any squad member's name, you will gain access to the Overwatch Camera, an AI-esque free-movement view of the groundside battlefield which lets you see anything a marine can see, provided their headset camera is still on. This greatly helps in coordinating the marines, as this gives you unrivaled situational awareness of what's going on on the ground, letting you coordinate marines more effectively than any other role can(save for the AI who can do the same). PFC Jim getting ambushed southeast of FOB? Yell over comms, tell everyone about it, and bring the full force of the deathball of ungas down upon the xeno force. Breach west of FOB? alert everyone so it can get patched before the Queen arrives and goes REEEEEEEEEEEEEE!!!!!!!. You can also click the Jump To action button on the top right to jump to any marine at will, provided their camera is still on, of course.

But say you're having problems articulating the exact position of the murderball to whatever stragglers were late to the party. Fortunately, the Overwatch Console has Quality of Life functions to help! Primarily, the CIC order waypointing system thingy™. You'll notice some extra action buttons appear on the top left of your screen while in overwatch camera view

. If you select one, and then shift-click a tile, it will set a waypoint marker visible to anyone with a squad HUD along with a sound and a chat message alerting them of the waypoint. These waypoints come in 3 flavours: Attack, Defend, and Retreat, and has a 1 minute cooldown period for placing one.

Rule of thumb: when telling marines where to go, it's recommended to tell them in cardinal directions from the FOB, rather than location names. Marines don't have a magical indicator telling them where they are(yet), so they likely won't know where "DORMS!!!!" is, even when they're literally standing there. They will however, know roughly where they are from the FOB since they probably came from there(drop pods and Tadpole notwithstanding). Or you can just use the Waypointing system mentioned above.

As a Staff Officer, you are not expected to go down to the ground and do any fighting yourself. However, that doesn't mean you aren't allowed to. Otherwise, your pistol and Tac binos would be useless. So while you are allowed and able to go groundside, you should only do so in exceptional circumstances(such as when ordered to by the captain, or when everyone else who has tac binos are dead as fuck).

Should you do decide to go groundside, you should wear some armor, get a proper weapon, the usual stuff. And remember, as command staff, you have access to Orders, which give temporary buffs to nearby marines, which can be helpful in select situations. Your Tactical Binoculars are also important assets, as they can call down Railgun fire and mark for Close Air Support or an Orbital Bombardment(OB) strike. When used tactically, these can change the tide of battle very quickly, for better or for worse(OB FF man, hell of a thing). Do remember that you are not the only person that can do this, the FC and SLs both have tac binos too, and they don't have the extra responsibilities you do. Again, don't go groundside unless absolutely necessary.

There comes a time in every TGMC ship's service life where it gets sent understaffed(lowpop), and someone needs to do all the extra work. Usually, this would be the synth, but sometimes ships forget to bring those too. If you find yourself unlucky enough to be in one of these situations, congratulations! you have more jobs to do, since being a high rank means you have access to places other people don't.

The RO's still asleep and people are screaming for Valkyrie Automedical Modules. Being a person with access to the ASRS console and the req bay itself, you're next in line to hand out the good stuff. This also means however, that technically, you can one-man set up a Supply Drop with relative ease! Though, someone still needs to drop a squad supply beacon for that to work, though that's nothing a little case of "screaming over comms" can't fix! Probably...

It doesn't matter if you have no clue how to operate the complicated interface of the OB loading computer, you're the SO, you have access. So that means you are automatically obligated to load the OB cannon if no one else can do it. You have no engineering skill or Powerloader skill, but that doesn't stop you from trying! you can still use the powerloader, albeit slowly, and you can use the OB console, albeit with a whole lot of fumbling about. The procedure for loading the OB is as follows:

tip: don't press the Close button, it does nothing at the moment, and only slows you down if you don't have Engineering skill which, as the SO, you do not have.

The Captain is dead. Long live the Captain.

Taking over as Captain might seem daunting, until you realize that it's basically what you were doing before, but this time, you are using the Main Overwatch Console. The key difference between the Main and regular Overwatch Consoles is that you have access to fire the Orbital Cannon. A great power with greater responsibility. The Orbital Cannon can be fired at ANY laser target, doesn't matter if it's a Railgun laze, a CAS laze, or an actual OB laze, as well as the Orbital Beacons. Checking the target area before you fire is doubly important with the OB as it is the most powerful weapon available to the marines, and the last thing you want is to accidentally hit the FOB with it. It is possible to "Groundfire" the OB, though this takes longer than it would for you to hit the button from orbit, and requires arcane knowledge known only to some.