From /tg/station 13 Wiki
(Redirected from Telescience)
Jump to: navigation, search

Please note that the Telescience Lab is not available at roundstart on any map. If you want to do telescience, you'll first have to build the equipment yourself with components from Research and Development. The machines still exist in the code, and you can salvage some parts from space, but that's simply just not enough.

Tha' Hell is This New Fangled Telescience Stuff That Runs on That Electricial-Tricity? 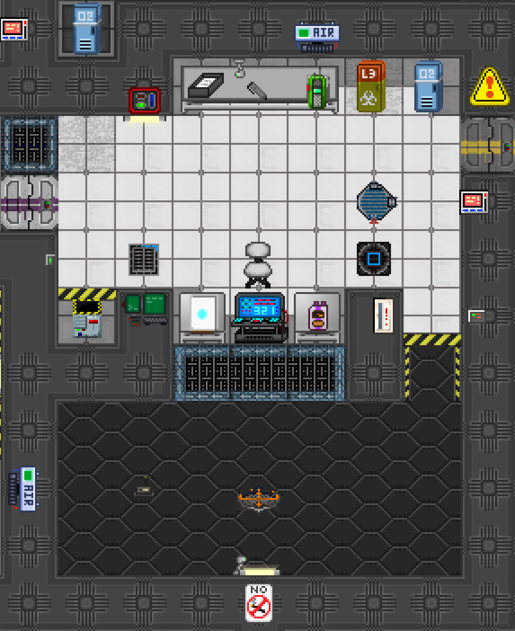 To work with telescience, you'll need a Telepad, a Telepad Control Console, several telecrystals, a secure room to teleport people and things in and out of, and several handheld GPS readers.

Telescience is imprecise, but potentially extremely useful. Try teleporting GPSs to see where they go, and then from there you can move objects or people back and forth from your lab. Like all science, experimentation is key!

Holy Shit, I Will be the Ruler of Space and Time!

A word of warning. Telescience requires math. Of course, as a scientist, you have a good understanding of mathematical knowledge and projectile trajectory, right?

The telepad console has 4 variables that can be set:

Together, these 4 settings define the coordinates whatever or whoever is on the telepad will find themselves after you push the Send button on the console via the following equation:

For non-mathy people, think of the telepad as a cannon. Your bearing is the angle you rotate the cannon to, your elevation is the angle you point your barrel at the sky, the power is how hard you're going to shoot the projectile, and the sector has no analogy here.

For mathy people, think the same thing, but keep in mind the following

Alright, I'm ready to teleport a bomb into the AI Core!

Not so fast. It would be way too easy to use telescience if the equations were that simple! To compensate, Nanotrasen has added some features to make telescience more inaccurate! Basically, there are little "offsets" that get added to the values you input. For now, we're just going to deal with two offsets, because that is how the teleporter currently is. Here they are:

So, in reality, here are the real equations we will be using with telescience:

To make things even more fun, every 20-40 uses the teleporter will have to be "recalibrated," which randomly changes the offsets. Yay!

At first, the telepad will be calibrated. That means the following: the Bearing setting will be offset to a random value between -10 and 10 degrees, and the Power setting will be offset randomly from -4 to 0. After calibration, there are somewhere between 30 and 40 uses before it will have to be re-calibrated. When recalibrating, the bearing and power offsets will be re-rolled. These values do not stack, so they will always be within these ranges. To find out these offsets, you will need those little gizmos called GPS. Grab two, place one on the telepad and the other in your pocket.

Now this next part requires some math and a calculator supporting square roots and inverse trigonometric functions, specifically asin() and atan(). If you're incapable of math, ask yourself what the hell are you doing in the Research Division of the most high-tech space station ever built, and apply to Head of Personnel for the Clown's job.

and the equation for actually finding the offset is:

So, to recollect, to find the power offset you need to:

Now, to find the bearing offset. When you teleported the GPS, you might've noticed it didn't go precisely north, although the bearing was set to 0. The bearing offset is to blame. Once again, assume the GPS travelled X tiles west and Y tiles north. Then, by dividing X by Y, you get the tangent of the offset angle, and the angle itself can be calculated as offset = atan(X/Y) after that, you need to convert it from radian to degrees so it is better to do it like this offset = atan(X/Y) * 180/pi (it's also integer, so feel free to round). Given the GPS travelled west, that will be a positive offset that will be added to your bearing, so you have to compensate by substracting it from the bearing you will be setting. Inversly, if the GPS has gone east, the offset is negative and you need to add it to the bearing.

Congratulations! Now that you know both offsets, you can teleport anything with some deadly precision or steal some high-secure items in the most stealthy fashion without having anyone see the GPS tools dancing around! So, how do you put that knowledge to use? Let's assume you want to teleport something X tiles west and Y tiles north. First, you again need to find the distance as sqrt(X^2 + Y^2) (let's designate it D). Now, set the power setting so that ((power-offset)^2)/10 (let's designate that number as Dmax) was greater than your distance. (If you can't, you need to find you more bluespace crystals). Now, once the power is set, you need to adjust the elevation. Divide D by Dmax. As Dmax is greater, you'll get a number less than 1. You need to calculate the inverse sine from that number and then divide it by 2. In one formula,

Now the bearing setting is obviously dependant not only on the distances the object has to travel along the X and Y axes, but on the general direction it travels to or from (northeast, southeast, southwest, northwest). To set the bearing, you'll need to calculate atan(X/Y) if the destination is northeast or southwest, and atan(Y/X) otherwise. Both X and Y numbers here have to be positive (just the distances on X and Y axes without signs). (Writer's note: wish I could add a picture of trigonometric circle in here, that would explain everything much better than I can in words). You'll get a number between 0 and 90, which will be your bearing plus(or minus) offset if you're sending northeast. To send something along the same distances on X and Y, but in the other direction, you'll need to add a multiple of 90 degrees to it. So:

Now compensate for the bearing offset, punch those numbers in the computer and hit that Send (or Recieve) button! If you're not miscalculated and everything was done right, you should now have DAT FUKKEN DISK on the telepad or a maximum-yield bomb at the AI core. Enjoy your near-omnipotence, you've truly deserved it.

Sadly, every 30 to 40 teleportations (roughly) the Telepad will fizzle. This means you need to click Recalibrate and start from step 1. Learn to recalibrate quickly, or you may end up in a heap of trouble.

Leave handy beacons around the station, and GPS units at interesting locations in space, and you can easily find them again. It's worth putting something down in the Medbay so you can quickly send the wounded and the dead there. Suit sensors can give the precise coordinates of the wearers, so a Crew Monitor Console could help you retrieve dead or dying people.

Also, note that the maximum radius you can reach is proportional to power squared, so, with so much as three or four extra crystals, your reach extends immensely. Just insert them into the console and higher power will become available. This also amplifies the recharge time between teleports and the energy the telepad consumes from the room's APC. The maximum power is also increased by upgrading the telepad's capacitor.

Ugh. Fine. Just tell me what the hell I need to do!

My pleasure. Basically, we're going to substitute known values into the equations above and solve for the offsets. It's really not that hard. Here's what we're gonna do:

Let's get started, shall we? 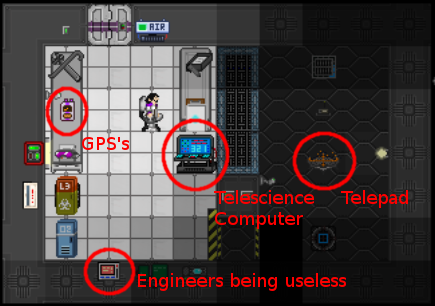 Write down that distance somewhere.

Alright, so now you have some values. Time to plug that shit into the equations.

First thing we're going to do is plug the numbers we have into the DestinationX equation to determine the bearing offset.

Subtract 185 from both sides

By default, my calculator calculates stuff in radians. To convert to degrees, multiply by 180/pi

Now to solve for the power offset.

First, plug in your values. We know the distance is equal to the square root of 1601, so no need to calculate that again. Elevation was 45, and the Power was 20.

Multiply both sides by 10

Take the square root of both sides

Well, we know that PowerOffset must be a negative number. Therefore we can remove those bars and multiply the left side of the equation by -1.

Add 20 to both sides

Challenges for the Robust in All of Us

If you're not a real scientist who likes to do science and learn from it, you can use these: