The SS13 Common Core is a community initiative in the vein of the SCP Project to crowdsource lore for interested players to take advantage of and incorporate into how they approach the universe of /tg/station's SS13 (hereafter simply referred to as SS13). The idea is to create a curated list of organizations, events, and facts about the universe that players can choose to abide and reference in-game, without the need to obsessively document how every element of the universe works, or seek acceptance from the entire playerbase. If you enjoy the project and the idea behind it, feel free to engage with it and contribute! If you're not interested in it or disagree with the idea of codifying lore, carry on as you did before.

What This Is Not

This is not an exhaustive effort to catalog the universe of SS13 in great detail, as with Baystation. Rather, it is a collection of ideas and starting points for you to use IC with other players to generate interesting conversations and events. It is also not defined in the code and thus truly "canonical", as Goonstation has done. Unless someone separately decides to submit code referencing info from this project and the separate /tg/station code maintenance team approves it, this is all essentially a shared headcanon/collective fever dream.

The year is 2560. The universe is in flux, as giant megacorporations escalate from covert treachery and assassinations to outright skirmishing, government organizations desperately try to reign in and project power over said corporations as they expand to the farthest reaches of space, and fantastic and fascinating scientific advancements are constantly being made then destroyed. But by standing too far back and looking at the big picture, it's easy to miss out on the most compelling parts of life in the 26th century. These are the stories of the people, pets, silicons, and everything else in between who have become involved with Nanotrasen and their ventures. 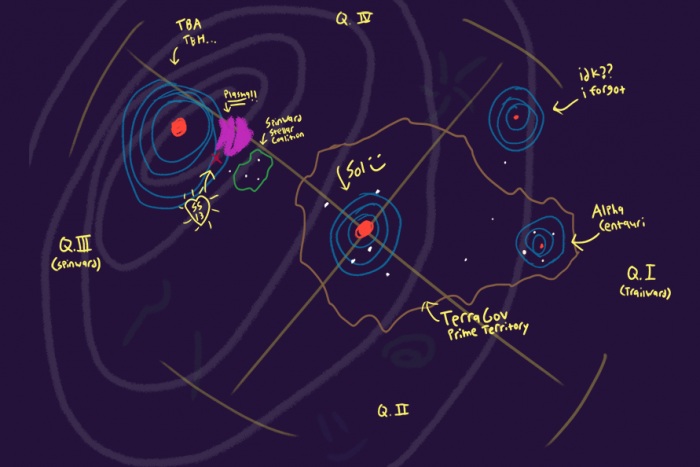 Space Station 13 as a destination has reached near-mythical proportions among the adventurous types since its initial launch in 2548. It began, along with a series of similar stations, as a small, highly classified and secretive plasma research facility far in the depths of the peripheral edges of civilized space. Access to it was kept incredibly hush-hush, and while staffing standards weren't great due to a distinct lack of qualified personnel wishing to disappear for undisclosed periods of time to go to a research station no one knew the location of to study topics unknown, Nanotrasen managed to keep the facility afloat more-or-less. There were a good number of security incidents, and life aboard the station was dangerous and fraught with threats from enemy agents to dark magicks and more, and the entire station has been detonated or disappeared more than a handful of times only to be rebuilt by hand, but the minerals and knowledge coming back more than made up for the considerable expenses.

Over time, however, as former members of these stations snuck away from Nanotrasen's grip back towards the civilized galaxy through a variety of means (escape pods, hijacked shuttles, smuggling themselves out on supply and personnel shuttles, etc), Nanotrasen executives began to panic. Anxious to share the horrors and abuses they suffered at the hands of Nanotrasen's carelessness and greed, former crewmembers began publishing exposés and speaking out about the nature of life with Nanotrasen on the periphery. Despite early success with wetworks attempts at silencing the outspoken individuals, by 2555, there was enough testimony and corroborating material to finally force TerraGov, the premier galactic government, to begin a hesitant inquisition into NT. The stories of crewmembers from Space Station 13 gained the most attention and became the face of the growing scandal.

By early 2557, Nanotrasen's elite was in a state of near-complete terror. The stories of their abuses and disdain for the lives of their workers in pursuit of the almighty Space Dollar had reached a fever pitch, and more and more it seemed like the large government contracts that made up the bulk of NT's income would evaporate into thin air. The Syndicate, the loose coalition of smaller companies set up to sabotage NT, were counting the days until NT would collapse.

It was at this point that something no sane person could have ever predicted came to pass. The steady flow of skilled yet unstable workers to NT's Periphery, which any rational person would have expected to sink like a stone in response to the constant scandals, actually began to increase. Somehow, despite the popularly known tales of widespread violence and abuses, more people began to make the trek Spinward to find employment on these stations. How could this be?

As it turned out, the public at large adored the dangerous and desperate tales that the former crewmembers wove about life on these stations. To the utter bewilderment of the whistleblowers, the public interpreted these stories as heroic and brave in a time of relative ease and comfort in the core system. Swarms and swarms of skilled workers sought out employment on the Spinward Periphery, the most prestigious and competitive location being Space Station 13.

And so it's gone for the last few years. Now, in 2559, Nanotrasen actually has an entire media department dedicated to telling heroic, propaganda laced tales of daring and adventure onboard their stations, as more and more hapless individuals succumb to the meat grinder. Nanotrasen has managed a healthy rebound and recovery, much to the chagrin of workplace reformers and the Syndicate, though they aren't completely out of the woods yet. Government investigations and sanctions continue to plague NT as they continue diversifying towards the private sector, and it's become readily apparent that the kind of crewmember willing to work for NT for the thrill of it all is more than happy to double their fun and succumb to various Enemy Organizations of the Corporation. Asset losses are reaching astronomical levels as NT tries to regain control of their growth, which now outstrips their income sources and is beginning to bite into their cash reserves.

It is into this world that the crewmembers of SS13 now enter. There are many reasons to become a crewmember on a Space Station as dangerous as SS13, whether it be the attractive hazard pay, the academic clout that comes with contributing to an NT publication, the promise of a fresh start in spite of past sins, or simply the thrill of surviving one day at a time. Cloning aside, no two crewmembers are quite the same, as they all meld together with their unique experiences and skills to try and survive until the end of their contracts to reap the rewards of their work. And, of course, they look to make the most of their time in an environment so completely removed from normal life as being an employee of NT.

Random things and facts that don't deserve their own article or I haven't gotten to yet.

Where can I find more?

How can I contribute?