The Life of a Crate Pusher

You're the RO, Req Officer, the supply guy. What this entails is actually a fair bit more than what it seems. The basic role of an RO is to keep the marines supplied with ammo, supplies, materials, and other things, keep the ship supplied with those as well, and also to give marines better equipment. If there is no other command staff, you'll likely be the acting captain, and as such will have leading the marines as a secondary role to keeping them supplied. Remember: A marine with no equipment is a marine who's not fighting (and very likely screaming at you).

Once you spawn in as an RO, you'll have your loadout selected items as well as some standard equipment, the most important being:

This is how your department looks on PoS map: 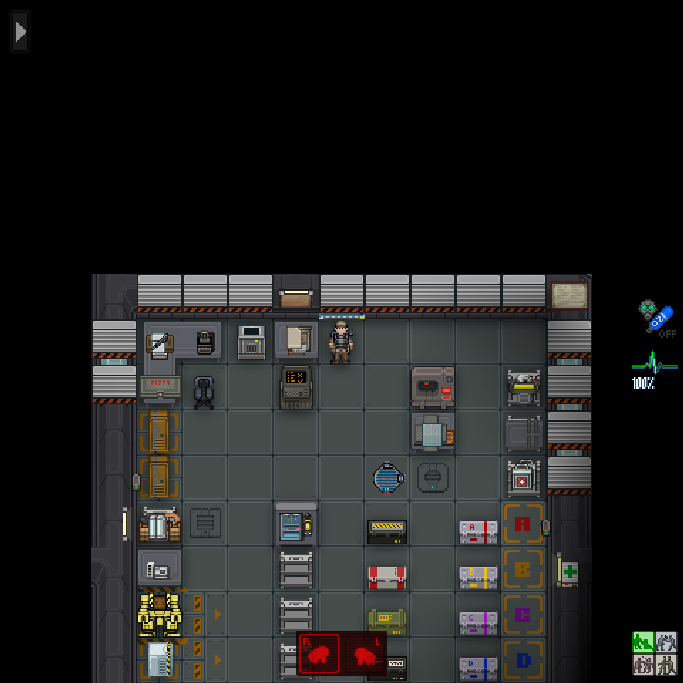 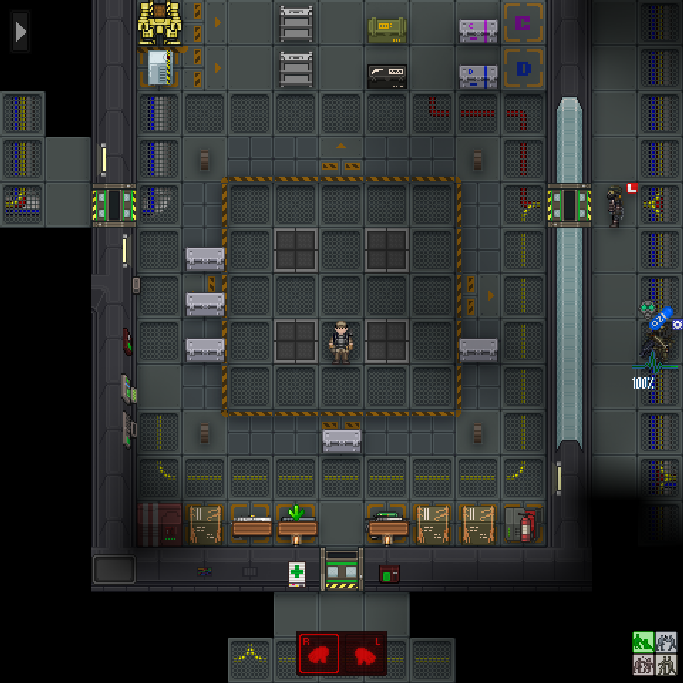 In general, it is recommended to equip yourself with webbing and swap your revolver belt for toolbelt (you can always swap back in case shit hits the fan).

After equipping yourself with gear you deem necessary beyond your starting equipment, you would proabably want to open department shutters (on PoS map it's directly above console, on the table), letting marines know that requisition is, in fact, run by someone, so they wont shout at command and try to break in.

First thing that most of RO prefer to do is to order an ASRS Bluespace Pad outright and deliever it to the Dropship, reason being that despite it's 50 point investment from the beginning of the round, it will pay off itself rather fast as marines would use it to export ore crates and alien coprses. Otherwise they would need to load all of it on the dropship, then deliever it all the way to the lift, which is very slow. You can pretty much live without it, relying on later method of getting points to spend those 50 points or something you deem more useful, but expect to be shouted at and called bad RO if you do so.

After you're done with ASRS thing, there is a multiple things you might want to do:

In the meanwhile, marines and other personel would leave orders for stuff they want/need but can't get in their prep or in any department, and it's your duty to manage them. Typical roundstart orders might include one or more things:

There always would be some rather wasteful orders that should be outright denied, examples being:

If you're unsure on how to handle either order - use your best judgement or ask for an advice on the command channel, surely someone would help. Getting proper reason from whoever ordering helps too.

How to Order Things

ASRS is your bread and butter, as it allows you to order various types of supplies and gear for exchange for points, which can be earned by exports. Use the console or your tablet and interface would come up (if it won't - rejoin). This is how it looks: 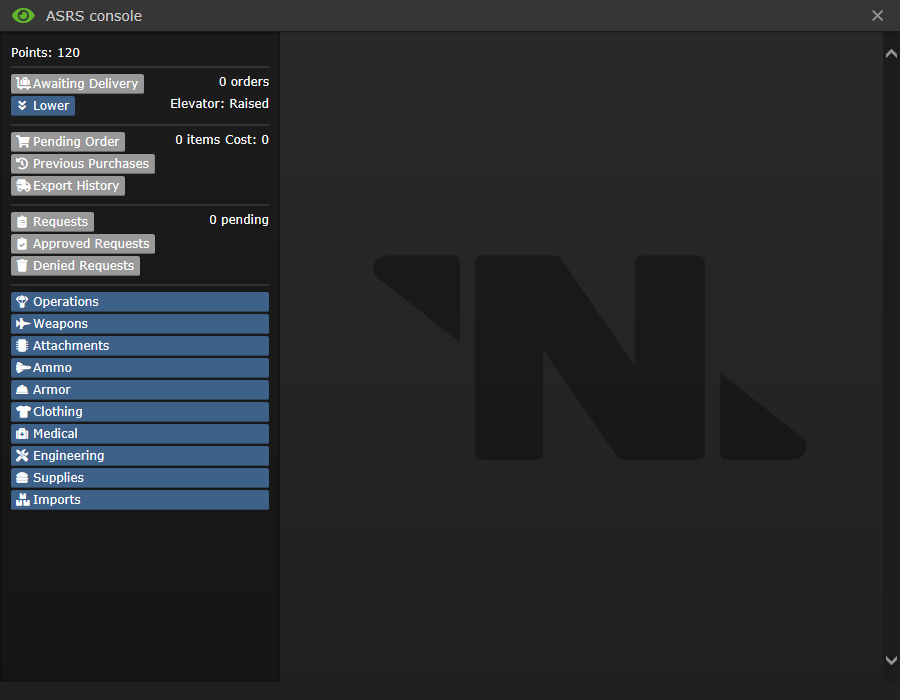 Go to whatever category the desired item is in (for example, it's "Operations" for ASRS Bluespace Supply Pad). Click the single arrow to order one, or the double to waste all your points getting as many of this particular item as you can. Then go to the "Pending Order" tab and hit Approve, if you're satisfied with your selection. It will be moved to the "Awaiting Delievery" tab and corresponding to summary price of supplies amount of points would be deducted, and next time you will rise lift - it will be on it. There is also other tabs:

Exports is your main way on getting points (other one being passive regen, but it's kind of slow and not so reliable for costly orders). It can be done either via your lift platform or using ASRS Bluespace Pad. To get points from exporting using lift, simply place stuff you want to export on raised lift without any packaging (like crates) and it will automatically give you points upon lowering. ASRS is slightly harder, but much more useful and handy.

Next part is more for marines than for you, as they would be delievering and using it most of the time: After you get it, deliever it to the ground (usually via dropship), drag it to the desired destination, wrench it down (it must either be in powered room or on powered cable) - done, you now can place things you want to export on top of it and use it (if you can't pixelhunt for it under all stuff you want to export - use alt-click) to momentarily export things and gain points. It also reports how much points was received for which item, so you can shout at RO to order you fancy stuff.

List of things you can export is quite short:

After you're done with operation start chores and marines are already deployed it's time to gather and deliever more supplies they would need on demand or by your initiative. The very first thing you need to do is to ensure that there is at least one supply beacon deployed inside FOB, as it is vital part of supply cycle without which it will be hindered considerably. Second thing you want to ensure of if ASRS pad (if you choose to ordred it, which you really should) brought from dropship to FOB, wrenched down and working, as it is essential for exports, which is your main point source.

After all of that, you have some free time, consider to do any of the stuff listed above that you could't do early because of a hurry and more:

List of most used guns in that order for reference (from authors personal experience, don't quote):

Then some orders should begin to come in from various channels. In the middle of the operation (from half an hour to hour in) it would likely be additional materials for a FOB and some ammo that wasn't packed by marines themselves. Those are usually easy to fulfill. Other than that, after scoring some points for you via exports, marines will request various shiny and often costly equipment, such as spec guns (ranging from IFF sniper rifle and minigun to the Scout Rifle and MBX shotgun), B18 armor and maybe some additional armor modules they've missed shipside. In general, you want to prioritize general stuff that would aid most of marines and would most likely be profitable to the operation as a whole, such as meds and building mats, as well as turrets if requested, and only after it - any personal request for guns, modules and armor, which could give a boost to marines, but likelyhood of that is somewhat less reliable.

In case of marines becoming indifferent from time to time, you can use your best judgement and assemble a care package for them with all sorts of useful supplies:

In the end-round (hour from the beginning and onwards) few general scenarious could take place:

This list is not extensive by any means and would likely be expanded: