Difference between revisions of "Research Director"

So you're going to be the caretaker of a bunch of lobotomy patients with access to some of the most dangerous things on the station! This is a brief overview of the Research Director's job, what he or she will inevitably face and how they can overcome adversity. 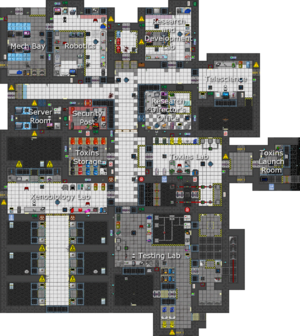 The halls of SCIENCE!

Bare minimum requirements: Upgrade important Medbay equipment, know who has 6 maxcap bombs, and know how to deal with the silicons if they become less than friendly

Get It All Together

As the Research Director, your job is obviously to direct research. You have access to all things scientific. 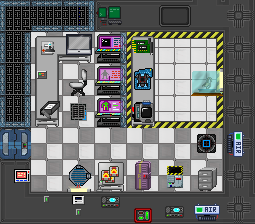 The office of SCIENCE!

You arrive on the station inside your office next to toxins mixing. You have the front seat if when it catches on fire. So sit back and enjoy the view. Remember that you have two of the most important consoles on the station - the AI integrity restorer and Robotics Control consoles. Guard them with your life. In your office you have:

You may wish to periodically check how many cyborgs there are on the robotics console and if any are no longer slaved to an AI, or has stopped functioning.

Scientists will be your primary subordinates. They will be working with the R&D, Toxins, and Xenobiology laboratories. You may want to ensure that all three labs are manned by assigning your scientists roles at the start of the shift. Toxins and xenobio labs usually don't need more than one scientist working there at a time, unless they're requesting help. Familiarize yourself with all sub-departments of Science and be prepared to fill in when something is needed.

Periodically sync the research computer in R&D so Robotics has access to the latest data. This also backs up your research data to the server, so if something happens to the research console the data can be easily restored. DO NOT FORGET THIS!

Don't forget to check on the Roboticists every now and again to ensure they are doing their jobs which is building and maintaining cyborgs, bots, and exosuits. Sync their research console if they haven't already, as well as their fabricators. Make sure they aren't building combat mechs without authorization, and try to convince them to put tracking beacons on their creations.

Geneticists have the habit of monkeying themselves or abusing superpowers. If they manage to bypass your supervision and start abusing their powers, notify security immediately and have them stripped of rank.

At the start of each shift, the Research Director is one of the more vulnerable heads of staff on board. Given enough time, however, he can develop into a powerful, destructive force. You start with access to the Toxins and Xenobiology labs, which both can be used to your advantage if you're familiar with them (Which, being the Director of Science, you most certainly should be).

There is a Reactive Teleporter Armor in your locker - It is both a fantastic tool and a hilarious deathtrap. When it is activated, any physical contact (Hugging, stripping, grabbing, hitting) will cause the armor to shunt you away in a random direction. While can be incredibly useful, it can also be incredibly dangerous if you're near space. It can easily fling you out into the void, so be mindful of when you keep it on or off.

While you can produce a vast array of weapons, a large majority of them require a Firing Pin. These can be found in the Armory, in your locker or ordered from Cargo. While you cannot replicate the standard Electronic Firing Pins, you can create two unique versions: Testing Range pins, and Mindshield Pins. The former will give your gun the ability to be fired exclusivley on the Firing Range, for testing, while the latter will not fire for those who do not have a Mindshield Implant. Gear given to Security typically benefits from being pinned with them, as it prohibits their weapons from being used against them.

Inside the display case in your office is a surgically modified facehugger. It can no longer kill and implant its embryos inside a host body, but it still feels the need to leap on anyone in reach. It's usually best kept in its case. With a chameleon projector, Lamarr can be scanned to act as a fearsome disguise.

There's No I In Team

Your official responsibility is to ensure that nobody does anything they shouldn’t. This means making sure the Geneticists don’t turn the Captain into a monkey, that Roboticists don’t kidnap and borg the Clown, that Xenobio doesn't spawn angry mobs everywhere, that Telescience doesn't steal the nuke disk, that R&D doesn't see what happens when they put two bags of holding together, and that Toxins does not destroy the Station.

Do not try to stop Toxins from igniting itself; if they are stupid enough to set themselves on fire, no amount of shouting or threatening will stop them from doing so. As long as the fire is contained to Toxins, nobody gets hurt.

With a wizard on board, Science can often find itself in all sorts of trouble - There are several high-risk items inside your department that the magical intruder might be after, and beyond that, your very life could be in danger! In fact, it probably is, between fireballs, animated objects, and polymorphed xenomorphs. Try to ride out the storm until it's time to go home; or, if the Wizard is horribly incompetent (As is often the case), settle down for a long shift of relative quiet. If the wizard has EI NATH then you have to focus more on Robotics, and deal with borging the steady stream of brains into a robotic army.

Sometimes, groups of angry terrorists with spiffy red hardsuits and scary black borgs will board the station. They want to ruin your day, so make no mistakes and take no prisoners. It's pretty much a given that you'll be evacuating, so strap up on your favorite gear and get stuck in. Remember that two easy-access weapons of yours (The Telescopic Baton and Flamethrower) are both very effective against nuclear strike teams, being able to totally invalidate energy shields and swords. Just try not to get shot.

Computer Maintenance And You

In the event of AI damage or deactivation, there is a computer in your office which can be used to restore and repair its systems. Simply put an IntelliCard loaded with an AI into the console and start the process. The AI should be functional again at 50% integrity. This is a long process, but it is still usually better than having no AI at all.

In addition, it is possible to build a new AI from the circuit also found in your office. Using plasteel and glass, it is constructed just like any other computer up until the human brain is inserted (only if you want a new AI, else you'll get an empty core you can transfer existing AIs into). Keep the existence of the human component hush-hush! It's a trade secret! Please be aware that a freshly constructed AI comes with the default Asimov laws, unless you put a law circuit with a different lawset in during construction.

ROGUE AI – When the Spotlight Shines Your Way

The Robotics Control in your office will be your primary weapon against the deadly worldwide gangster communist frankenstein computer god! Using it, you can lock and detonate cyborgs, as well as view their relevant stats: This includes charge, selected module, operational status, and arguably most importantly, their status as slaved or otherwise to the AI(s). An unslaved Cyborg almost always warrants investigation if you have not received a notice from Robotics about unslaving a borg!

If you have reason to believe a cyborg is rogue, lock it down so you can find the cyborg and check its wiring. You can also deconstruct the borg frame in entirety to retrive and question the MMI, although whether or not it cooperates varies heavily. Only detonate the borg as a last resort - And even when you are considering doing so, remember that the detonation is a rather powerful explosion can severely injure nearby humans. Under no circumstances are you to waste valuable equipment to paranoia or rumors.

There are three types of rogue silicons that you should be familiar with. Each has a slew of different options regarding how you can deal with it.

How To Tell A Traitor From A Disillusioned Doctor

A revolution is a bad time for both research and directing it - As such, you're in for a wild and dangerous ride where you will live as a robust freedom warrior or die the endless hordes of greyshirt commies. The sad reality is that you are extremely vulnerable, as you start in a department where dangerous things are easily put together, along with the fact that the high department population typically means there is a head revolutionary hidden somewhere inside. At the FIRST sign of danger, you need to be RD outski and get to Brig. This means:

You will either be one of the first to die (Along with the CMO) or the last in line, dragged kicking and screaming into the afterlife. Or, you will be a robust hero. The choice is yours.

AI Overpopulation: The Core Circuit And You

Whether to reduce the load on primary AI, circumvent AFKing players, increase your chances of survival during AI malfunction or just to increase information chaos, with this nifty AI Core circuit board found in your office and some additional components, you can make a second, working AI. Be sure to place it near an intercom or radio and you now have two working AIs on the station.

The research director, like all heads of staff, make extremely dangerous traitors just by virtue of their access and departmental loyalty. You have so many ways to screw the station over: bombs, guns, possible chemistry access, the power to make EVERY POSSIBLE AI UPLOAD BOARD, comms boards, bags of holding (and thus singulos), extra tracking beacons, mechs, an excuse to emag borgs... you can tear the station apart and make them stay on it. While your underlings are less likely to fall in line than security or a horde of clowns ordered to create chaos, a majority of the time they'll let you get away with truly wicked deeds just for the sake of SCIENCE!

A Bag of Holding is so big it can even hold shotguns and ion rifles. Technological shells can be used to produce some very special shotgun shells. If you go through the effort to build telescience equipment, you can teleport anything you want from and to anywhere you want. Don't forget illegal modules for cyborgs, which unlocks their locked module (pacid for medborg, diamond drill for minerborg, etc.) at the cost of damaging their interface, making it seem like they're emagged. You can also make the clusterbang launcher, for mechs, and the T.Y.R.A.N.T. module for AIs, with that illegal tech you got. Finally, with a portable chem dispenser, bluespace beakers and large grenade casings, you can have a wider range of grenades than Team Fortress Classic.

Less useful but still dangerous, robotics is a hive of scum and villainy even when staffed by decent sorts. If a head of staff drags in a corpse and orders it to be borged or just takes out the brain himself, generally speaking no questions will be asked and the deed will swiftly be done. The corpse and/or brain of your victim can then be given to the chef who generally believes meat is meat.