The Supermatter Crystal is the primary power source in most stations. A supermatter shard can be ordered from Cargo, which works the same way, but can be moved around. Its primary features are emitting electrical arcs that are harnessed to power the station through tesla coils. Side effects include radiation emission, making everyone who could theoretically see it hallucinate, releasing hot oxygen and plasma, heating the air around, and exploding or creating singularity/tesla or eating the entire station if you screw up hard enough. It begins inert but being hit by an object or projectile will activate it and it'll start exhibiting nearly all of the aforementioned properties.

The supermatter is an extremely unstable crystal with particular properties. Here's an executive summary on how it behaves:

The aforementioned Heating Damage is taken when the supermatter absorbed gas mixture is above a certain temperature limit. This temperature limit is usually at 626.3 Kelvins but can be changed by a slew of other factors.

Once the supermatter reaches 0% integrity it will initiate a 30 second countdown and delaminate. During this 30 second window there are two important things to consider:

To recover the crystal from the impending delamination, the supermatter needs to heal back up to a positive integrity, including the damage taken during the 30 second timespan.

The crystal's power determines how much energy is produced each tick through arcs, and also the range and amount of radiation and hallucinations generated. (a 'tick' usually takes around 1-5 seconds depending on lag). Internal energy will also be a major factor in the heat output of the supermatter, so efforts to lower it while saving a delaminating supermatter should be undertaken.

tesla generators. The main zap can be modified by various factors.

Without a high priority zap target these electrical zaps will zap humans and cause burn damage. If grounding rods or tesla generators are not present you are going to need shock protection.

The crystal produces plasma and oxygen while it's active. Plasma and temperature is produced according to the energy, while the main factor for oxygen will be the temperature of the absorbed gasmix (energy also plays a small role). These are then multiplied by the waste factors detailed below.

While the supermatter starts taking damage at 626 Kelvin by default, plasma and oxygen combusts at 373.15 Kelvin. This combustion is exothermic and will very often bring the temperature of the supermatter well above the 626 Kelvin threshold. For most cases this combustion temperature will be the number you want to avoid instead of the damage threshold.

The supermatter is dangerous for multiple reasons.

A Practical Guide to The Supermatter

So you wanted to skim the theory and jump right into the action? We got you covered. This is a step by step walkthrough to set your local supermatter crystal up. Beware however, there are many improvements that could be made!

Step one: Safety and Preliminary Preparations 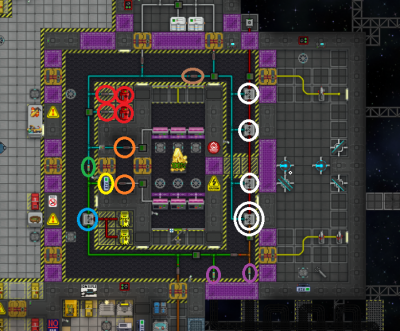 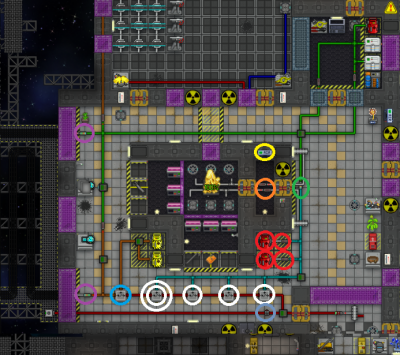 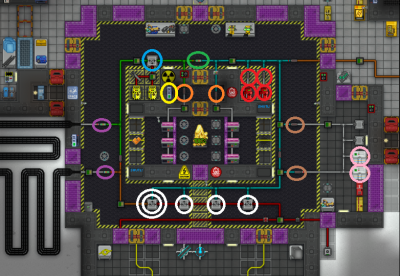 With these all done, the nitrogen should be cycling through the system and getting nice and cool. Give yourself a pat on the back, for the hardest part is over!

The supermatter will now begin arcing and generating power.

If the emitters are not firing despite being turned on, it means they are not being sufficiently powered. This could either be because a cable to them have been severed (less likely), or the station does not have enough power to run them. To fix this, you could:

Congratulations! The supermatter engine is set! 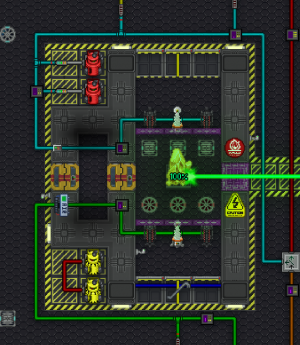 You want to replace most pumps you can find with either straight pipes or with valves. It is recommended to do this in the start of the round, so that we don't lose any gases from unwrenching atmospheric devices.

This is because gas in a network is always evenly spread through all connected pipe. Pumps exist only to create pressure gradients, but in the supermatter where gas is always flowing in a circular fashion it will only restrict flow, or even worse clog on delaminations.

Pictured to the right is the roundstart MetaStation SM setup, but modified to have all the unneeded pumps / filters removed. Pumps have a set limit on the amount of gas that can flow through each tick, and when dealing with a SM Delamination, every second counts.

The direct turf (location/tile) of the supermatter is what dictates it's behaviour, and thus an integral part of any supermatter engine is sufficient cooling of the crystal's immediate environment. The cooling system used by the standard supermatter engine is a dynamic system; meaning that the gases around the supermatter flow to other parts of the engine in order to get cooled. This is why a single pipe being broken might cause catastrophic consequences.

On our standard supermatter setup, there are two main factors of cooling: heat exchanger pipes and freezers. Note that both of these apparatus perform cooling only on the gas in it's immediate "container". A single freezer or heat exchanger pipe will be less effective on a larger pipe network than a smaller one due to it getting a smaller share of the gas that it is able to cool. Keep this in mind when doing expansion to the setup.

Heat exchangers work on the basis of conduction, that is between the heat exchanger and the turf it is in. For our supermatter heat exchangers, the heat sharing will be performed with a space turf (with the temperature of 2.7 Kelvins and heat capacity of 7000 J/K.) or snow turf (with the temperature of 180 Kelvins and heat capacity that varies slightly). This conduction process will only happen when the temperature difference between the two gas mixtures is higher than 20 Kelvin or Celcius.
Expanding the cooling loop means expanding the part of the pipe network that is actually able to exchange heat, therefore increasing the cooling power. However doing also means that the filters will be able to work on a smaller amount of gas, lowering the amount of gas that goes into the supermatter chamber. It might be worthwile to pump in more coolant if efforts to expand the loop are undertaken.

Freezers also work on the principle of heat exchanging. The gas directly present in it will have it's heat exchanged with a gas mixture with heat capacity and temperature dictated by the parts and setting. For more information on thermomachines head here.

It is possible to use heat exchanger pipes filled with cooled

Plasma directly inside the crystal's chamber for even better cooling. This method of cooling however is not present by default and will need to be added in by an engineer.

The first step to averting delaminations is to turn the emitters off. Waste produced by the supermatter scales based on energy, so cutting the energy supply to the crystal is one of the best first steps to take.

There is no one sure way to fix the supermatter, but there are a few common causes:

Want to sabotage the crystal but can't figure out how to pull it off? Here are some pointers and hints:

These are the easiest to pull off and require no special conditions. You'll want to keep the supermatter chamber very hot and full of plasma or CO2.

This kind of delamination requires careful gas management but is faster, far more destructive and there's a good chance it will irradiate, burn and shock the engineers who are trying to fix it.

This is difficult but also simple.

Alternatively, if you are a dirty traitor and you received the objective to cause a cascade, do the following:

Note that resonance cascade delaminations only work on the main engine, not on shards. You will not receive the objective if there is no valid engine.