Super noob to editing wiki's, but a big fan of SS13 and the CM game mode, and a lifelong Alien/Predator universe fan. Artist, writer, and sci-fi nerd of high caliber.

Step 1: How to be the Ultimate Badass

You've decided to become the hero the corps needs! Good choice, but do you have what it takes?! This quickstart guide should get you started in no time, but first, you need to read the TGMC:Rules.

We are an MRP (medium role-play) server, meaning that you're expected to acknowledge the roleplaying nature of the game, follow the rules, and at least try and behave like a marine. You don't have to go writing love letters to your sweetheart back home or crying to the psych about your PTSD, but just avoid low-RP shenanigans and excessive memes. While our rules are pretty lenient, that doesn't mean your actions won't have IC (In Character) consequences. Stealing or refusing to listen to orders is against TGMC:Marine Law and will get the Military Police after you, or maybe a friendly stomping by your fellow marines!

If this is your very first time playing Space Station 13, you'll definitely want to read some starter guides and may want to play a few rounds on a standard SS13 game mode server before jumping in here.

Hold up, recruit! Before you jump into the action, we recommend that you set up your character. Choose 'Setup Character' from the New Player Options tab. 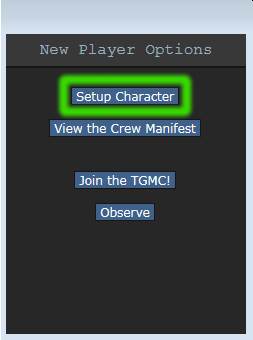 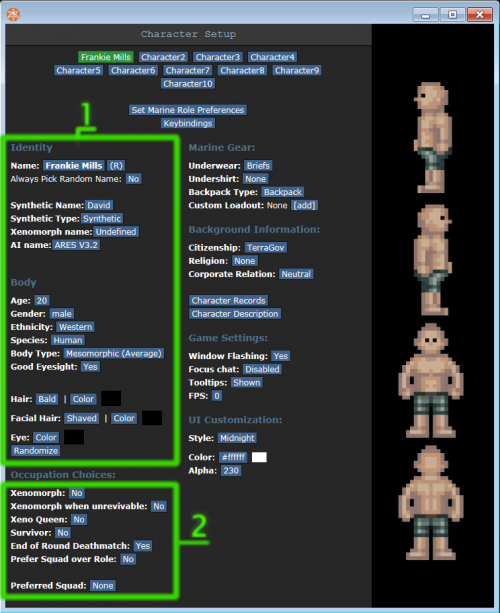 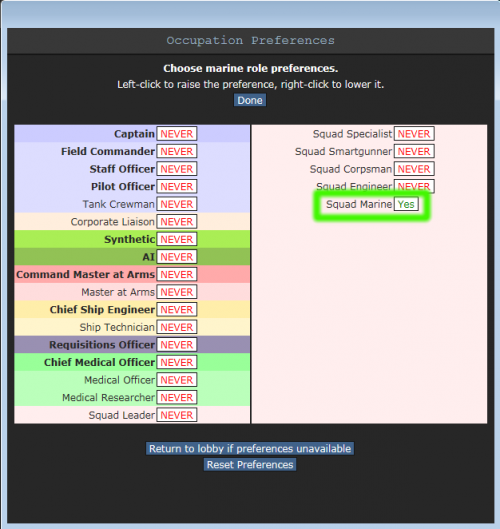 You may also take a look at the marine role preferences list, but if this is your first game we recommend that you go as the standard TGMC:Squad Marine. They are t:the necessary backbone of any military operation and thanks to our modified skill system, also extremely versatile.

When you're done, either click the ready button or click Join TGMC if the round has already started and pick 'squad marine' from the bottom of the list.

Step 2: Man, this floor is freezing!

You've just woken from cryo, probably alongside your teammates. What are you waiting for, breakfast in bed?! You will be almost naked, hungry and most likely confused, but don't worry, baldie—the engineers counted on that when designing the ship.

First, find the important message in your chat box to the right. This is your squad assignment, role, and who your direct superior is in the chain-of-command. Unless you picked a preferred squad in your preferences, you'll be assigned randomly. As you can see, there are four colored lines to guide you. In this example, we've been assigned to Delta squad. That means we follow the blue line down. Your squad color is indicated by the squad name's text in the squad assignment message: 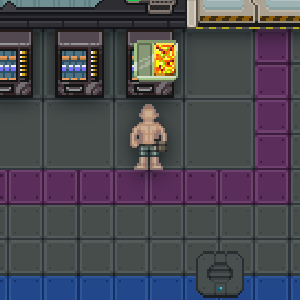 Follow your squad's line up or down to the canteen for some breakfast, recruit, because hungry marines move slower. There are two canteens on the port and starboard sides of the ship. Walk up to one of the vendors and dispense your preferred dish. Pick it up by clicking on it, then click on yourself to take a bite.


Your hunger is indicated by this little icon to your right:

It has four stages in total: orange for starving, yellow for hungry, no icon for full, and gray for having over-eaten. The starving and hungry states will slow you down, and as of now, overeating has no effects on gameplay besides your appearance. It might take several of these to fill you up as you've been in cryosleep for a good while, but shovel it down, recruit! We haven't got all day! 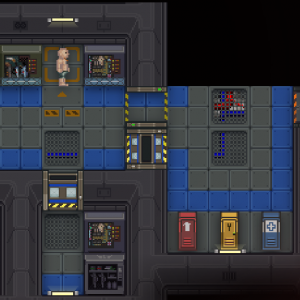 After you've had your chow, keep following your squad's colored line on the floor and hustle to your squad prep room. Each squad has their own. Inside, you'll see Squad Marine lockers on one side of the aisle, and separate rooms for specific roles on the other. Walk up to one of the Squad Marine locker areas.

For your first deployment, dispense the standard-issue kit, marked in white. For a squad marine, that's your uniform, gloves, boots, boot-knife, earpiece, and helmet but you'll need more gear before you're ready to go. The recommended choices for armor, pouches, and attachments are marked in orange will serve you just fine for your first drop and hopefully bring your rookie ass home alive.

After dispensing it, pick up each piece and either press the default equip hotkey 'E' to equip it to the correct slot, or click on the correct slot while it's in your hand. Good grief, recruit, here's some advice: your uniform has to be on before you put your armor on, and the webbing attaches onto your uniform. Your webbing, armor, and helmet all have their own small storage slots, and you can store things like weapons on your suit storage (beside your feet slot) or on your back slot. The knife can go in your boot, and the attachments obviously go on your weapon, so just put them in your satchel or on the ground for now. You reading this, baldie?

The Automated Weapons Rack opposite the closet supplies the most important and beloved equipment: your firepower.
Open it up and be both intimidated and aroused by the long list of state-of-the-art weaponry the Corps has graciously provided you.

Go with the standard issue and dispense one M41A1 Pulse Rifle and 6 M41A1 Magazines (10x24mm). Pick up your rifle and a magazine and, with the mag in your active hand, click on your rifle to load it. If you picked the default attachments, just get them in your hand and click on your rifle while holding it. A circle timer will appear above your head as you attach them to your weapon. Attach the magnetic harness, extended barrel, and angled grip one at a time. Now your rifle is ready to go. Press the hotkey E or click on your suit storage slot to stow your rifle. (Note - The magnetic harness will return your rifle to your suit storage in the event you drop it. This is a very useful tool, as you will drop it at some point.)

As you can see, there is a large variety of primary and secondary weapons. It's also possible to store a weapon on your back slot if you don't have a backpack or satchel, or choose one of the many belt or shoulder holsters for secondary weapons. You can explore these options once you have a grasp of the basics, recruit, so don't worry about them now.

This is your basic kit for this operation, and now we're going to switch to something very important, your Screen Interface and Heads-up-Display.

The image to the right shows the Marine game screen. The HUD icons are highlighted and explained below. Note that many of these icons are the same as standard SS13, but there are also many important differences. 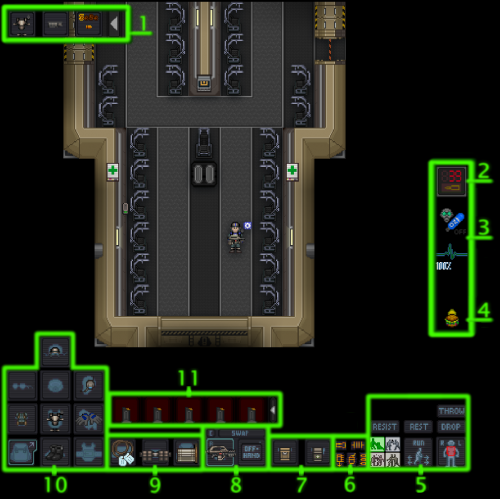 Many of the tabs in the top right window are similar to standard SS13, and only the notable differences will be covered here. Explore the rest of the tabs and buttons to learn their functions.

Many options can be changed in this tab. You can also change your game preferences which includes your character setup and keybinds, normally accessible from the pre-game lobby menu.

Most of the buttons in this tab can be accessed by the weapon buttons on the bottom right of your game screen. The unique ones that cannot are:

Status icons are the small icons floating by the heads of the characters in the game screen. They can represent many different things, and as a Squad Marine, there are many that you won't see until you take on different roles. The most important ones covered here are the rank icons and the health/status icons like stunned, dead, and the different defibrillation states.

Dead!
After a Marine is dead, they will show three different defibrillation states, yellow, orange, or red:

These represent how long a marine has been dead, and a decaying timer before they can no longer be revived. If the icon is orange or red, they may suffer brain damage or other conditions if they are revived.

You must have an earpiece, headset, station-bounced radio, or be speaking into an activated intercom to communicate. Radio controls are similar to standard SS13, with the default hotkeys being T for chat, O for OOC chat, and M for 'me,' the verb/emote chat. Press T to open the chat box and type ; to speak on your radio's default channel. Different headsets have different available frequencies (channels) and some can be tuned to whatever frequency the user needs. Examine your headset to see what channels are available to you. Note - :h is usually the common frequency that everyone can see.

Pay attention to the chat box on the right side of your game window! It shows all communication in the game, and if you ignore it, you're going to find a commander's boot up your butt real fast, marine!