From /tg/station 13 Wiki
(Redirected from Disease)
Jump to: navigation, search 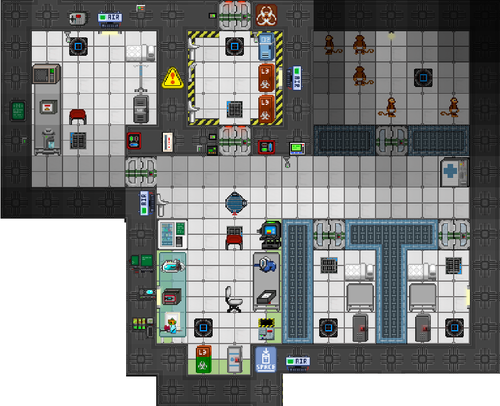 Corpses that are outside the morgue's trays and bags generate Miasma, wich depending on the atmospheric concentration can cause nasty diseases that can override your own viruses if their Transmission is higher than your virus' Resistance. Always ensure doctors take the irrecoverable bodies to Morgue or ask the AI or Atmospheric Technicians to set your air alarms to Contaminated mode, or at least bring you a Portable Scrubber to scrub out all the Miasma from the air.

To neuter a symptom, you combine 1u of your isolated symptom with 1u of Formalehyde, and the symptom gets "neutered", meaning it won't cause whatever effects they have, but will contribute to the virus' overall stats with theirs. That means that Fever (Neutered) will not make the subject "feel hot", but it will grant the virus no stealth bonuses, +3 resistance, +3 stage speed and +2 transmission. This is recommended to make your virus a completely "positive" virus by only having good symptoms or their ones neutered, which will make them appear with a blue smiley face on your doctor's medical HUD's, and also drastically reduce your chances of getting lynched.

A virus can have up to six symptoms. Trying to add a seventh symptom to a virus will instead make it replace one random existing symptom. Having more symptoms can sometimes make the virus less resistant and less likely to spread, but can also be your best friend on other stats like Stage Speed.