Fire support is a complicated, yet important part of the marines' arsenal. In case you haven't noticed, the Xenos don't have a massive ship, dropship, ground assault jet, and mortar equipment, and you do (the closest they get is the boiler, which sexually identifies as a howitzer). What stifles marine use of these seemingly impressive tools is their lack of knowledge on how to effectively operate, and coordinate the use of these weapons. Hopefully this guide will help you better make use of the tools entrusted to you and not single handedly cause an entire squad to be wiped.

Obviously, screaming over the general channel asking for mortar coords can either get drowned out or drown other things out, which can lead to some lost information which may or may not be crucial. Fortunately, fire support has its own radio channel! Using the :s prefix, you can call for OB, CAS, mortar coords, and the like, if your headset allows you to speak on that channel anyway. Most Command and Engineering staff have access to this channel, and encryption keys can be vended at the Surplus Armor Vendors, or taken from the mortar supplies crate that combat engineers lug around.

The Tactical Binoculars are going to be the primary way of calling down holy hellfire upon the xenos scum. There are other ways(to be mentioned later), but none as versatile. It has the ability to find the coordinates of a given tile, mark and fire the shipside railgun, mark an area for CAS attack, and mark and fire the Orbital Bombardment cannon. You can switch between these modes by alt-clicking it. Not to mention that it has night vision as well, so you can see what you're going to delete, even in pitch black darkness! Use it in hand to activate the zoom, and ctrl-click to mark a target. Examine it to see what mode it's currently set to.

This is what you use to get the coordinates of a tile, which you can then communicate to whatever schmuck is operating the mortar back at base, if webmaps lag you out too much. Shift-click a tile while zoomed in to get the coordinates for that tile, while on any mode. Coordinates are also useful for drop podding marines, though it would be wise to not tell them to drop directly into the entire hive with no support.

The shipside railgun is arguably the simplest of the fire support weapons, because it needs only one operator: you, with your tac binos! The Railgun can be fired by simply ctrl-clicking a tile while zoomed in, after a short wind-up period. After firing, it needs a moment to cool down before it can be used again.

The Tactical Binoculars can be used to mark an area to be hit by CAS. Depending on what aircraft is currently doing the attacking, you can plan around:

Beware, for you now hold in your hands the power to consign an entire area to oblivion. While the primary firing technique for the OB is having the CIC staff fire it, you too have the ability to fire it from groundside. For the CIC staff to fire the OB, you'll need to mark an area by ctrl-clicking like usual. The Ones Above can then fire the OB at that mark after a short wind-up period. However, say that the CIC staff are ERPing in the showers still asleep or otherwise occupied, you'll have to fire it yourself. after the wind-up period, there is an extra 15 seconds or so of wait time. after that has elapsed, a beep and a message will appear:

After this message appears, you will be able to fire the OB by ctrl+shift-clicking your laser mark. Do know that you are expected to be able to see the target area, so if you end up "accidentally" hitting friendly marines, The Gods might not let you off the hook too easily...

The humble mortar is the TGMC's indirect firing method of choice, because someone left all the Self-Propelled Guns(SPGs) back at Terra. While it might not be the most powerful piece of artillery, it is portable, effective, and very versatile. to deploy it, simply use it in-hand, and use a wrench to undeploy it. The mortar operates using coordinates, which can be obtained either through one of the many webmaps available(acessible via the main page), or by using the range finders which come with the mortar kit, as well as using tactical binoculars.

Simply input the coordinates, and click the mortar with a shell to load and fire it. Once set, the coordinates can be saved in case you need to fire at that position again. The mortar can save 3 positions to target. Do note that the mortar has a slight randomised offset for every target, and can be dialed in using the offset options(negative longitude= left, negative latitude= down) for more pinpoint accuracy. Accessing the UI and firing a shell requires Engineering skill to perform quickly, otherwise you will have to fumble around first.

When fighting against an existential threat such as the xenomorph horde, you're going to need to use everything you have at your disposal to eliminate the enemy, up to and including a weapon made for the express purpose of ship-to-ship combat. A weapon such as the shipside railgun. While not particularly as effective against planetary targets as it is against spaceships, it has its uses. When fired, the projectile burns up in the planet's atmosphere, melting and splitting apart into a hail of molten metal. It is much better at being used for area denial rather than dealing actual damage due to its spread.
There are 2 primary ways to target the railgun: using tactical binoculars, or using an OB beacon.

try clicking the End Camera View action button, then clicking on the target beacon button again. This should allow you to fire the railgun. Though most times this method is never used, it never hurts to know. 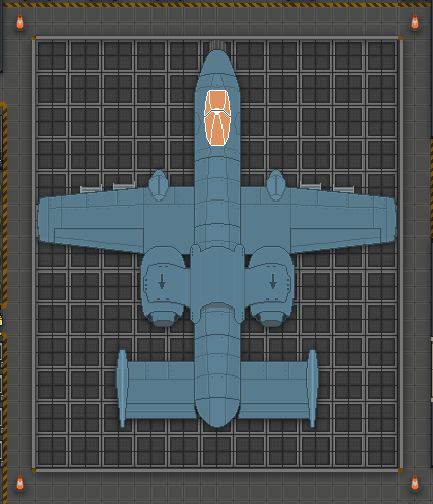 Close Air Support, or for short CAS, is your way of helping the marines. You can rain down hell on your enemies if you want to. But, for that the groundside marines need tactical binoculars to laze a spot for you to bombard. Communicate with the squads accordingly to make sure they know CAS is available.

But how do I kill my enemies, you ask? That is simple, first you obviously need to install the weapons to the dropship of your choice, normally it’s the Condor, because the Alamo is only rarely in the air. Note that the weapons you install are unloaded, and need to be filled with the ammunition from the ammo-storage room.

Then enter your cockpit, and wait. Make sure that somebody on the ground is aware that you are ready for CAS. Turning your engines on and lifting off pre-emptively gives you a better response time at the cost of inevitable downtime.

Once CAS is required, launch the Condor, select the weapon you want to open up with, and click "begin fire mission". You'll enter a map overview mode like the AI or Overwatch terminals where you can see anything within camera range of the ground forces, as well as the spot around the laze. You can fire on ANYTHING in sight of any marine on the ground, but all of your weapons will be danger close without the added range of the laser dot - this might not matter if your camera coverage is coming from a corpse's still-active helmet camera. Note that a lot of weapons have some degree of inaccuracy, especially the GAU and Condor rotary cannon, but these two also hit ridiculously hard.

If your fuel runs out, you'll land back on the ship automatically, but if your weapons run dry you'll have to land manually (remember to turn the engines off) and regardless you'll need to reload your weapons for the next CAS mission. You'll also need to refuel the Condor by using jerry cans on the cockpit - you can refill the jerry cans themselves with a large welding fuel tank, but not the backpack-sized ones. You can also purchase replacement ammunition at the dropship part fabricator.

In case you decide that the Alamo could also be used for CAS, and somehow you haven't been lynched for thinking so, here's how the Alamo's CAS works. Unlike the Condor, the Alamo cannot target independently of a CAS marker like the Condor can. You can only fire at the area on and around the marker, and you can't even see the target area. The Alamo does, however, have electronics slots unlike the Condor, which can augment its CAS capability somewhat, but none that make it more favourable to use than the Condor.

The Orbital Bombardment cannon, the biggest and baddest piece of rock throwing equipment the TGMC has. Capable of launching a large payload from orbit at hypersonic speeds. The large payload size also allows a variety of warhead types to be used.

The Orbital Cannon must be manually loaded and chambered by a skilled technician(though an unskilled person could do it, but with a lot of fumbling about). Here is how to do it:

Targeting the OB can be done 2 ways:

The cannon can then be fired from the main overwatch console once the lase has been set, or by a tac bino operator groundside after a 15 second wait. It's worth noting that the OB can be fired at any lase, be it the dedicated OB lase, or a railgun or CAS lase, so it's important to check the damn target area before hitting the OB button!

Currently, the TGMC fields 4 warhead types which can be loaded as needed depending on the situation at hand.