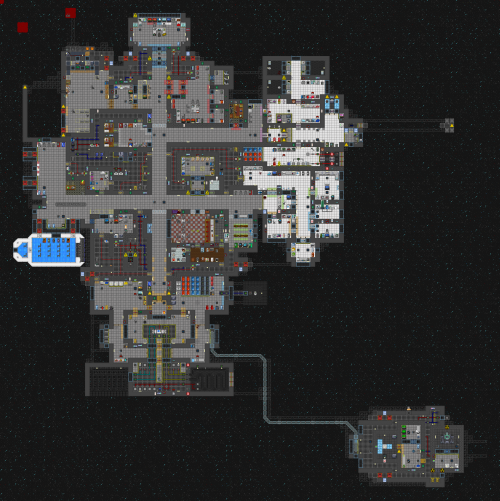 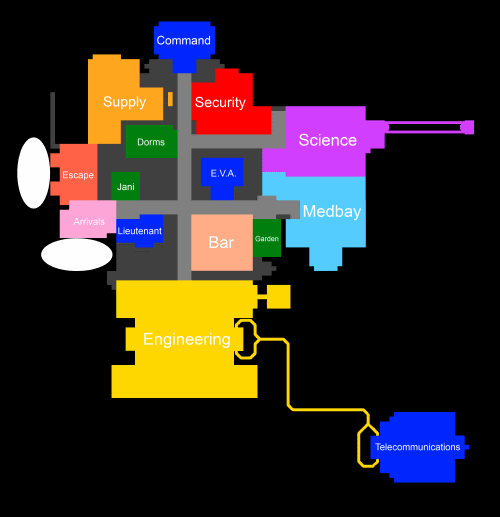 Simplified version of the MiniStation map.

A mod of tgstation 13 that is modified for low population servers; with simplified jobs, maps, duties and command structure.

Checkout the repo before the revert pr (see notice) and download it from then, you will need to update it to whatever modern standards you might be using

Who is the target audience?

Server hosters who want to host a server for a player count of around 5 to 20 people.

What about the map?

The map has been created from the ground up with population size in mind. You can see the map to the right.

Giacom, the creator, can be found in #coderbus on irc.rizon.net if you require help.

Many jobs have been combined or just plainly cut out. These are the remaining jobs with their duties next to them.

There will be 26 job slots (not including Assistant) available on MiniStation; the HoP can add more from his ID computer. There is a more simplified command system, with the Captain being the big boss and the HoP being second in command. The heads will have control over all departments and jobs.

What else has changed?

Changes to the uplinks were made to discourage murderboning, the rest is much the same.

MiniStation has an exceptional power source, called the Thermo-Electric Generator or TEG. See here how to set it up.