From /tg/station 13 Wiki
(Redirected from Security)
Jump to: navigation, search 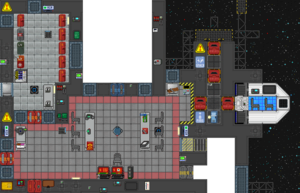 Always have your tools recharged after an arrest. If your flash is burnt out, get a new one from the lockers or security vending machine and hand your old one to a roboticist. Then take your baton or taser, pop them in the charger station in your security office or the Head of Personnel's desk, and wait for the light to change from green to yellow. Having a charged stun baton is sometimes the difference between life and death.

More can be built, as well as ED-209s who carry tasers.