The Menacing and Beefy Vampire

Humans are an abundant food supply that the xenomorphs use to no end. Their faces ripe for facehugging, their psychic energy ready to be drained, and their blood untapped for unlimited potential. New experimentation from the hivemind sought to utilize human blood in light of this biological philosophy and due to the fact that the TerraGov Marine Corps' weaponry can overwhelm xenomorphs. With the power of human blood, the xenomorphs create a living tank that runs on human blood. 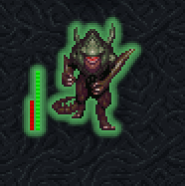 Green overlay on any xenomorph is overheal.

You are a tank, not a ravager, meaning you can take in damage but not deck out damage.

What makes gorger completely different from other xenomorphs is that the caste can take a lot of damage from marines. That said, this is not to say you can reliably rambo alone against marines without your fellow xenomorphs helping you out. Marines are capable of killing you, so you must have a way to escape safely so that you can recover from being swiss cheese.

To enable you to withstand marines' punishment, Overheal protects you from marines before your health and sunder start to get hit. You gain overheal from Drain, which roots marines for 4 seconds. You can give xenomorphs overheal with Transfusion if they are in full health.

You gain blood from Drain, whether alive OR dead marines! If there are more than one gorger, they can wombo combo a marine to get their blood. Note that this does not take actual blood for marines, so marines can rest assure that they don't die from hypoxia, or oxygen damage due to low blood.

Protect other xenomorphs by giving them overheal.

Some dead marines will have enough blood for you to drain.