The Praetorian is a powerful ranged-support Tier 3 Xenomorph that can spit both neurotoxin and acid, spray a large cone of acid, and emit pheromone auras to help allies within a certain radius. You are also tough enough to help with front-line combat, but are still somewhat vulnerable to fire. 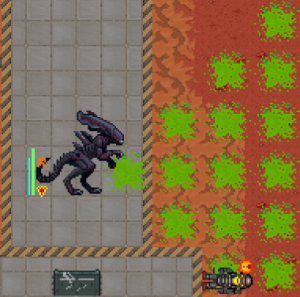 Praetorians are some of the hive's most powerful support and leader castes. When the hive decides what caste the spitter should evolve to, they default to the praetorian for the following reasons:

All spitters want to be the Praetorian, and all Praetorians want to burn down marines with acid spray and spit.

You can switch between neurotoxin and acid spit, and your acid spray is a very powerful ability which sprays a cone of acid across the ground seven tiles wide and four tiles long. Acid spray will knock down any marine that it hits and will do damage to anyone that stays in it or moves through it while it's on the ground.

Pheromones are another critically important tool you must use. You can switch between recovery for faster healing and plasma regeneration, warding for extra protection, and frenzy for a speed bonus. Make sure you're always emitting pheromones to help yourself and your team, and when applicable, make sure you aren't overlapping pheromone types with other Xenomorphs to maximise their usefullness.

The Praetorian is a Tier 3 and cannot evolve further.

Maturity for the Praetorian will increase considerably more stats compared to other castes, which includes